For several weeks the issue of harassment and abuse of women has taken center stage. It is something that is long overdue. Women have had to suffer in silence and fear as more powerful associates took advantage of them. It’s a big step forward that they are being paid attention to now and that there are consequences for the perpetrators. Well, some of them. 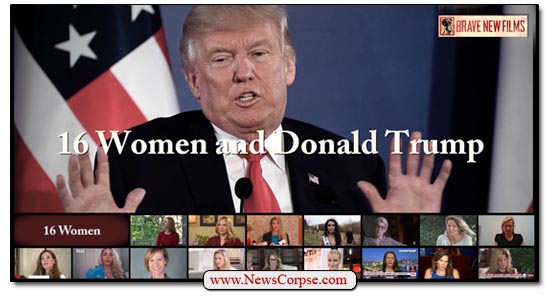 Harvey Weinstein has lost his job and his company. Kevin Spacey and Louis C.K. are now pariahs in their industry. GOP senate candidate Roy Moore, is still hanging on, but is being abandoned by more of his own supporters everyday. However, there is a notable omission among the ranks of sleazeballs who have grossly abused women who trusted them. Donald Trump appears to be getting away with his despicable and criminal behavior.

Trump’s abusive acts have been well known for some time. He even admitted to criminal sexual assault in the video from Access Hollywood. But he was elected president anyway by so-called “family values” voters who dismissed his contemptible conduct in favor of rank party politics. And he has the full support of Fox News, a network whose corporate culture virtually encourages sexual harassment. Now Brave New Films has produced a video that compiles sixteen of Trump’s accusers describing the acts committed against them. It’s a moving presentation that needs to be seen by as many people as possible:

Brave New Films has a website that hosts this video and makes the point that no one should be excused for such heinous behavior. It occurs by aberrant men in every walk of life, every industry, and every political party. And justice must be served on an equal basis without favoritism. As is pointed out on the website: “[O]ur current president isn’t immune to being held accountable.” That ought to mean that if other perpetrators lose their status and position, so too should Donald Trump.

Allowing Trump to remain in the White House sends a terrible message to all Americans, particularly women and girls. If Trump isn’t impeached for obstruction of justice, collusion with Russia, financial corruption, undermining the free press, or being a pathological liar and malignant narcissist, then his sexual depravity and criminality should be more than reason enough.

One thought on “And What About Trump, the Sexual-Predator-in-Chief: This Must-See Video Needs to Go Viral”