Following an embarrassing “Make America Gag Again” tour of Asia, Donald Trump slinked back into the White House and immediately took up his Twitter machine to regale in his own wonderfulness. Having achieved nothing of significance, while kowtowing to foreign adversaries, the President needed to sing his own praises because no one else with any credibility was going to do it. 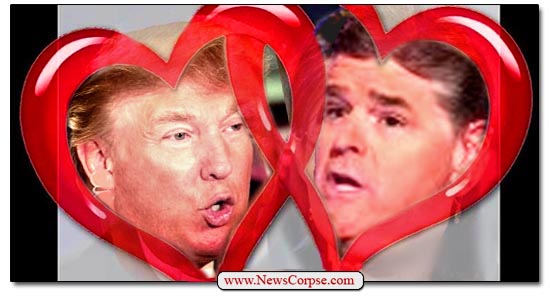 However, he has not neglected his primary role in public service since pretending to engage in it. As a candidate and an alleged president, Trump has spent more time promoting his PR department (aka Fox News) than any other “official” duty. Fox News has benefited greatly from this arrangement, scoring millions of dollars worth of free advertising. For example, for just one program, Fox and Friends, Trump has tweeted or retweeted 142 times since the beginning of his campaign. And the “Curvy Couch” potatoes were among his first tweets upon returning to the U.S. Note that most of Trump’s Twitter activity is to promote something he recently saw on Fox. This one is promoting something that has yet to air. Apparently they are sharing their programming schedule with him in advance of broadcast:

.@foxandfriends will be showing much of our successful trip to Asia, and the friendships & benefits that will endure for years to come!

Trump also wanted his Twitter followers to know how much he suffered while travelling the world. The itinerary that he pitifully regarded as “almost physically impossible” had the added torture of having to watch something other than relentlessly fawning Fox News coverage (i.e. real news):

While in the Philippines I was forced to watch @CNN, which I have not done in months, and again realized how bad, and FAKE, it is. Loser!

What’s more, Trump gave a bigly shout out to his most devoted cheerleader on Fox, Sean Hannity. He retweeted this celebration of Hannity’s ratings:

This is the clearest sign that Hannity is big trouble. He has been losing advertisers at a rapid clip since coming out in support of the pedophile Republican running for the senate in Alabama, Roy Moore. The seventeen percent ad revenue slump at Fox News is evidence of the disastrous impact Hannity is having on the network. Consequently, Trump was called in to help plug the leak. But there are some serious problems with the help he’s providing.

First of all, the positive ratings tweet that Trump retweeted is two weeks old. It doesn’t represent the whole picture of Hannity’s ratings performance. He has been frequently beaten by MSNBC’s Rachel Maddow. The most recent ratings for this past Monday show Maddow trouncing Hannity. No wonder Trump didn’t post something more timely.

Furthermore, the Twitter user Trump retweeted identifies himself as a media analyst, but his account was created less than three months ago and has only sixty-nine tweets. He follows only two Twitter accounts: Sean Hannity and Rachel Maddow. He’s also a writer for the ultra-rightist web rag, American Thinker. And somehow Trump found a rotting two week old tweet from this nobody and saw fit to relay it to his glassy-eyed disciples.

Hannity must be hanging by a thread. When Fox News fired Bill O’Reilly it wasn’t because of the tens of millions of dollars that they had to pay out to multiple women who O’Reilly harassed and/or abused. Fox was cool with that. It was because his advertisers had ditched the program and it was no longer financially viable. That’s what Hannity is facing now. That’s why Trump is contributing, in his lame way, to Hannity’s rescue. Even Hannity recognizes that he’s sinking fast. Tuesday night he did a double back flip to throw Roy Moore under the bus:

Trump’s post-Asia tweetstorm was typical self-promotion and lies. It conveyed nothing of value to the American people. As usual he is just consumed with himself and fails to do any of the hard work of governing. He complains about being forced (by whom?) to watch CNN and spews endless praises for his pals at Fox. Yet he insists that he doesn’t have time to watch TV (which he also did five months ago). And in all of that Tweeting he left out any updates to this tweet from two days ago:

I will be making a major statement from the @WhiteHouse upon my return to D.C. Time and date to be set.

He must have forgotten what his “major statement” was. Maybe he’s picked up whatever virus caused Jeff Sessions to forget so much of his recent past with Russians. Or Maybe Trump’s aging and distorted memory is just incapable of functioning anymore.