The Age of Alternative Facts is in full swing. Donald Trump’s administration has ushered in era that unabashedly traffics in verifiably false information and deliberate deceit. They are literally proud of their ability to disseminate lies and they do so even after the lie has been revealed. 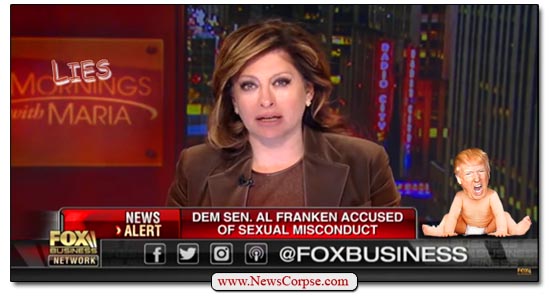 However, they could not do it alone. Fortunately for Trump et al, they have an alleged “news” network that is just as brazen in its embrace of falsehoods as Trump. Fox News recently fortified its already ultra-biased lineup with known Friends of Don who are happy to distort reality on his behalf. The network appears to be digging in as a response to the clouds of doom hovering over the White House in the shape of Russia.

Fox also has another propaganda spewing channel that serves the interests of the President. The Fox Business Network pretends to be a financial news outlet, but its programs are just as politically slanted as anything you’d see on the Fox News mothership. A crystal clear example of that came on Friday during a segment on Mornings with Maria featuring the “Money Honey” (her own promotional tag that she sought to trademark), Maria Bartiromo (video below). In this exchange with former Deputy Secretary of Labor, Christopher Lu, Bartiromo gives Trump absolution for his past sexual crimes and misdemeanors:

No allegations against the President? Has she been in a coma? There are at least sixteen women who have come forward with credible allegations of Trump’s sexual harassment and/or abuse. See this video that features many of them describing his misconduct in their own words. Even Trump’s press secretary acknowledged the allegations. Although she bizarrely claimed that they should not be investigated because he denied them. That’s a peculiar legal position that implies that once a suspect denies the charges, the matter should be dropped.

Bartiromo seems to be taking the same position with her remarks about Trump’s denials. And what point she is trying to make with her reference to Trump’s threatened lawsuits is a complete mystery. It certainly doesn’t prove innocence. Especially since Trump chickened out and never followed through on the threat. Also notable is Bartiromo’s assertion that there is a picture showing Sen. Al Franken’s hands on a woman’s breasts. However, the picture clearly shows that he is not touching her, but pretending to and mugging for the camera.

Bartiromo then literally stutters through an attempted justification of her ludicrous denial of documented events. She ends up awkwardly complaining that it’s an apples to oranges comparison. And she’s right. There is a single accuser against Franken, who has been a frequent guest on Sean Hannity’s Fox News show, and whose charges mainly describe bad attempts at humor. While there are at least sixteen accusers against Trump who all describe behavior that is abusive and probably illegal. Apples and oranges.

Bartiromo was once considered a credible financial journalist. But since her move from CNBC to the Fox family she has transformed into just another right-wing shill. Her recent interview of Trump was widely ridiculed as an embarrassing exercise in sucking up. And now she has taken her hackery to the next level with comments that totally contradict reality.