For twenty years Fox News has obediently served the interests of the Republican Party and its wealthy, corporate benefactors. Throughout much of that time they have advanced provable lies advancing the policies and agenda of the far-right. On occasion they ventured off into Looney Tunes territory by pushing unadulterated nonsense such as charges that Obama’s birth certificate was fake, or that Hillary Clinton was running a child sex slave ring from the basement of a D.C. pizza parlor. 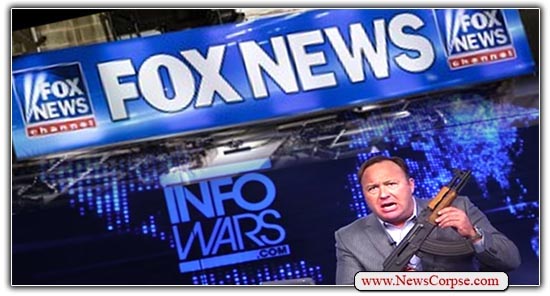 However, with the election of Donald Trump, Fox News has skidded off the runway of sanity. They have embarked on a coordinated campaign to smear special counsel Robert Mueller and everyone connected with his investigation into Trump’s collusion with Russia during the 2016 presidential election. But on Tuesday morning they sunk to new levels of delusional conspiracy mongering.

Radio talker and Fox News contributor Kevin Jackson was the allegedly “one lucky guy” on Fox’s Outnumbered. In a discussion about whether individuals at the FBI were biased against Trump, Jackson upped the ante by asserting that Trump may have been the target of an FBI assassination plot. No, really:

“Well, I think they’re going to say, is it — what was his intent, right? Because that’s exactly what FBI Director, former FBI Director [James] Comey said when he was letting Hillary Clinton off the hook. And his intent, regardless of whether it was an assassination attempt or whatever, it was definitely something. […] I’m just saying, we don’t know what it was. When you say, ‘we’ve got to make sure that this guy doesn’t get in at all cost,’ what does that mean?”

The magnitude of derp expressed in those remarks even gave co-host Harris Faulkner the heebie-jeebies. She vainly attempted to give Jackson an opportunity to walk back his lunatic comment. “I just want to make sure,” she said, “that we press in on the fact that no one has floated any sort of an idea…” But Jackson interrupted her saying “Oh, it’s been floated.”

Indeed, it has been floated. On Fox News of all places. Although they are coming to it a little behind Alex Jones of Infowars who was floating in a similar orbit just yesterday. He told his glassy-eyed disciples that:

So now the crackpot idiocy of Alex Jones has jumped feet first into the Fox News cesspool of Trump-fluffing derangement. Jackson is a confirmed StormTrumper whose opinions border on fetishism. Just prior to Outnumbered, Jackson was a guest on Fox and Friends where he likened Trump to King Midas saying that “everything that Donald Trump is touching, for the most part, has turned to gold.” That, of course, is patently false. Trump has failed on too many levels to enumerate here. But more to the point, Jackson apparently doesn’t know that the moral of the Midas story is a warning against exactly the sort of all-consuming greed that Trump represents.

For Fox News to put on these sort of irresponsible and dangerous ravings proves that they are desperately searching for a narrative to suppress any talk of Trump’s corruption and criminality. The fact that they are stealing material from Alex Jones suggests that they have completely run out of plausible ideas. So the notion of dipping into the most far fetched conspiracy mud holes is no longer unthinkable. And we should expect more of this preposterous insanity from Fox as Trump’s prospects continue to dim.