Shortly after Donald Trump and his Republican cronies passed a tax reform bill that gives away millions to to the rich, a few greedy corporations jumped into the media circus to lavish praise on the president who just made them all much richer. AT&T, Boeing, and Wells Fargo were among the companies licking at Trump’s boots by pretending that they were passing on savings to their employees because of the tax reforms. Never mind that some of them had planned to give bonuses long before this bill was passed, just as they do almost every year. Most of the companies have ulterior motives for exalting Trump. Particularly AT&T who is currently battling the administration in its efforts to acquire TimeWarner. 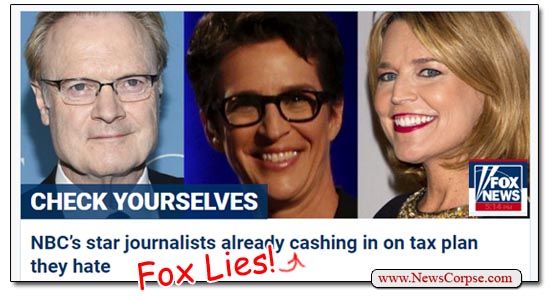 Also on this list of sycophants is Comcast, the parent company of NBC. And that connection was all that Fox News needed to invent a story about MSNBC personalities “cashing in” in on the legislation. Fox’s media correspondent, Brian Flood, published a story on the Fox News website with the absurd headline, “NBC star journalists already cashing in on the tax plan they hate.” The article accuses Rachel Maddow, Lawrence O’Donnell, and others of selfishly taking advantage of a tax bill that they opposed. The article stated that:

The highly paid journalists at NBC and MSNBC who keep blasting President Trump’s tax reforms won’t have to wait for their rates to go down to benefit, since parent company Comcast likes the plan so much it is sending out $1,000 checks to employees.

Comcast announced on Thursday that it would award special $1,000 bonuses to over one hundred thousand employees because of the passage of tax reform and the FCC’s action on broadband.

The cable company’s generosity presumably extends to seven- and eight-figure stars, who have been railing nonstop against the landmark GOP reform as benefiting the rich at the expense of the poor.

The first thing that’s wrong with the headline is that Fox has no evidence that any executives or on-air talent are going to receive a cash bonus. So the whole story is based on an invented premise. Flood says that “the cable company’s generosity presumably extends to seven- and eight-figure stars.” Presumably? Apparently that’s enough to be the foundation of a critical article by the standards of Fox News. However, these sort of bonuses are almost never extended to executive personnel who have a different scale of compensation benefits. What’s more, the average amount of company bonuses (about 1,800.00) is much greater than the one these companies are now touting.

Additionally, the article notes that Comcast’s incentive to provide these bonuses was only partly due to Trump’s corporate tax cuts. It explicitly cites “the FCC’s action on broadband.” Otherwise known as the killing of Net Neutrality. Comcast was likely thanking Trump for eliminating a regulation that will net them billions in profits at the expense of a free and open Internet.

But the most startling logical lapse by Flood was his complaint that it would somehow be improper for MSNBC’s stars to take the money since they have been hammering Trump’s tax scam for weeks. WTF is he talking about. The fact that these hosts would criticize a bill that promised them a significant windfall is proof that they are motivated by principle, not greed. They opposed a bill that would put more money in their own pockets because they knew that millions of other Americas would suffer. Most people would regard that as admirable.

For Fox News to imply that there would be something untoward about them getting a bonus that they campaigned against is stretching the boundaries of reason beyond recognition. They didn’t want it, they didn’t ask for it, and they aren’t even known to be getting it. But Fox is determined to create scandals where none exist because they haven’t got anything truthful or honest to report. And yet, this is remarkably sloppy, even for Fox News.