Heaven forbid that a single Sunday would go by without Donald Trump assuming his position on his throne and proclaiming the way the world is – or should be – on Twitter. His pronouncements have become a regular feature of the daily life of the White House. And this Sunday was no different as Trump took on everything from Hillary Clinton to Syria’s “Animal Assad” to President Obama. 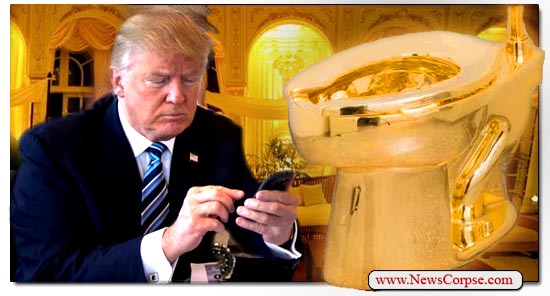 Of particular note was Trump’s latest broadside at Amazon founder Jeff Bezos and his Washington Post. The tweet was a familiar attack on the newspaper that he hates so viscerally. And it all stemmed from an article that revealed the diminished status of his Chief of Staff, John Kelly.

The Washington Post is far more fiction than fact. Story after story is made up garbage – more like a poorly written novel than good reporting. Always quoting sources (not names), many of which don’t exist. Story on John Kelly isn’t true, just another hit job!

Notice that Trump’s criticism is as substantively vacant as usual. He doesn’t cite one story that is “made up garbage.” He doesn’t give one example of anything being “poorly written.” And he can’t backup his delusional assertion that “many of [the sources] don’t exist.” He is just ranting uncontrollably in a fit of sweaty rage, unable to contain his anxiety or support the wild notions he is spewing. It’s another symptom of the fear that is eating him up. Although it is an excellent description of the blather he posts on Twitter.

The article in the Washington Post that got him all riled up was titled “‘When you lose that power’: How John Kelly faded as White House disciplinarian.” The Post did extensive research and was “based on interviews with 16 administration officials, outside advisers and presidential confidants, many of whom spoke on the condition of anonymity to assess the chief of staff.”” The use of undisclosed sources is a critical part of journalism. It protects people in positions to know detailed and intimate facts from the retribution of powerful bosses. Every legitimate news enterprises uses them. Trump even uses them and cites articles where they’ve been used, so long as the article advances his interests.

For some idea of what made Trump go berserk this Sunday morning, here are a few choice excerpts from the Post that paint an accurate picture of the chaos in Trump’s White House:

“The recurring and escalating clashes between the president and his chief of staff trace the downward arc of Kelly’s eight months in the White House. Both his credibility and his influence have been severely diminished, administration officials said, a clear decline for the retired four-star Marine Corps general who arrived with a reputation for integrity and a mandate to bring order to a chaotic West Wing.”

“After White House Chief of Staff John F. Kelly pressured President Trump last fall to install his top deputy, Kirstjen Nielsen, atop the Department of Homeland Security, the president lost his temper when conservative allies argued that she wasn’t sufficiently hard line on immigration. ‘You didn’t tell me she was a [expletive] George W. Bush person.'”

“Kelly neither lurks around the Oval Office nor listens in on as many of the president’s calls, even with foreign leaders. He has not been fully consulted on several recent key personnel decisions. And he has lost the trust and support of some of the staff, as well as angered first lady Melania Trump, who officials said was upset over his sudden dismissal of Johnny McEntee, the president’s 27-year-old personal aide.”

Candid observers have noticed that Trump is increasingly perturbed with Kelly’s attempts to shackle him and rein in his worst impulses. According to one source, Trump said that he was “tired of being told no” by Kelly. Consequently, Trump has been leaving Kelly out of the loop on important matters. For instance, Kelly was not around when the President called Vladimir Putin to congratulate him on winning a sham election. Nor was Kelly consulted about the hiring of John Bolton to be his next national security adviser.

The article quotes Bill Clinton’s Chief of Staff, Leon Panetta saying that “There are few things worse than being an impotent chief of staff. When you lose that power you become a virtual White House intern, being told where to go and what to do.” However, in Trump’s mind there are things much worse than that. Like losing the popular vote to Hillary Clinton, or allowing DREAMers to remain in the only country they know as home, or being exposed as a collaborator with Russian enemies to win an election and then obstructing justice to hide the truth.

But the most heinous atrocity that Trump can experience is the fact, and public awareness, that he is a loser at the things he thinks he excels at (which, of course, is everything). And that may be why he is so maddened by Jeff Bezos. It’s an embarrassment that was perfectly stated by this Washington Post editor to CNN’s Brian Stelter. And it is very likely the root cause of Trump’s derangement:

actual lol at @brianstelter's face reacting to this line about trump vs. bezos pic.twitter.com/PBISe8IpZP

2 thoughts on “‘Far More Fiction than Fact’: Trump Tweets the Perfect Description of His Own Twitter Feed”