Everyday there are more indications that Donald Trump’s shoddily constructed shelter from the scandals enshrouding him is collapsing. His closest allies are abandoning him and his administration, or are being cast out by him unceremoniously. Trump ends up being protected by incompetents with the same set of sleazy principles that he embraces. 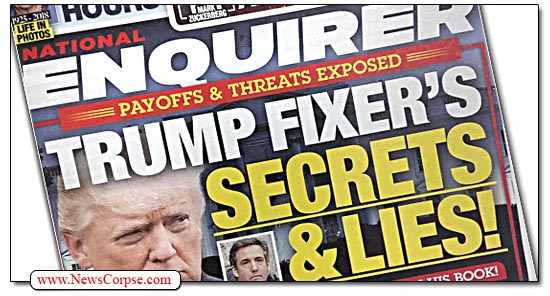 After the raid of the home and offices of Michael Cohen, Trump’s personal attorney, the President set out to distance himself from his long-time friend and lawyer. He told the hosts of Fox and Friends that “Michael is a businessman, he’s got a business. He also practices law.” Continuing he said that prosecutors are “looking at something having to do with his business. I have nothing to do with his business.” And when asked by Steve Doocy what percentage of his legal work is handled by Cohen, Trump said it’s “a tiny, tiny, little fraction.”

That description of their relationship amounts to trump throwing Cohen under a freight train. Cohen’s lawyers had just argued in court that Trump was one of his primary clients, along with Sean Hannity. But Trump is calling him a liar. Hannity also called that a lie. These characters are purposefully fleeing from any suggestion that they are connected to Cohen. And the reasons have to do with what is expected to be uncovered in the items collected in the raid.

Now another prominent friend of Trump is bravely running away. The National Enquirer is a gossipy tabloid whose chairman, David Pecker, is a close friend of the President. It has reliably boosted Trump on its front page, and attacked his political foes. However, the headline on the latest issue is joining in the rapidly escalating disavowals of Cohen. It reads: “Trump Fixer’s Secrets and Lies!” The article says that:

Cohen “is under the spotlight, as scandals swirl around his boss, and some are questioning Cohen’s role, alleging blackmail, threats, hush-money payoffs – and even collusion with Russia. The president is in the hot seat because of his lawyer.”

Indeed he is. And he knows it. There is speculation that Cohen is likely to “flip” on Trump and tell the feds every little dirty detail that he knows. And having been the President’s consigliere for at least a decade, he knows a lot.

For the National Enquirer to publish such a damning story about a Trump ally is an astonishing turn of events. This is, after all, the magazine that paid former Playmate, and Trump mistress, Karen McDougal $150,000 for a story that they never published. That’s a tactic known as “catch and kill” that is used to bury negative news so that no other publisher can report it. Recent headlines from the Enquirer include fawning praise for Trump and brutal attacks on his enemies. For instance:

So now the Enquirer is piling on Michael Cohen. This coincides with Trump’s blatant distancing himself from Cohen and nearly pretending that he hardly knows him. Trump is preparing for Cohen’s rumored intention to turn state’s evidence. He even posted a Twitter rant that implied that if Cohen sings, he will be lying. Trump said that “Most people will flip if the Government lets them out of trouble, even if it means lying or making up stories.”

It appears rather likely that Cohen is going to turn on Trump and his pals at the Enquirer are helping to discredit him before his testimony is revealed. And seeing as how the paper has been such a dedicated Trump-fluffing comrade, it’s inconceivable that the Enquirer would have published a story like this without Trump’s knowledge and approval. Therefore, the ground must be shifting under both Cohen and Trump. And a legal earthquake may be about to shake things up. Stay tuned.