The spectacle of a major cable “news” network flagrantly acting as the PR agent for the President of the United States is a frightening sign of America’s drift to totalitarianism. But that’s what has been happening for the past year as State TV (aka Fox News) has shamelessly shilled for Donald Trump 24/7. You know it’s bad when Bret Baier, the principle news anchor on Fox, concedes that the network’s hosts cause problems for him by acting as mouthpieces for Donald Trump. 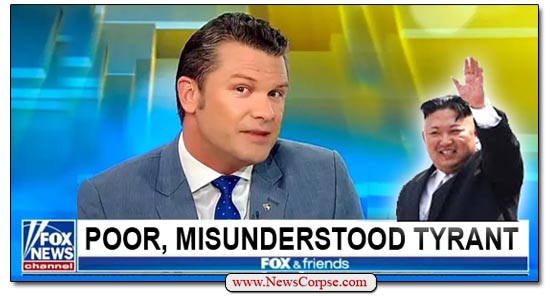 This embarrassing display of sycophancy, however, took a sharp turn into the absurd on Wednesday morning during an episode of Trump’s favorite TV show, Fox and Friends. The “Curvy Couch” potatoes were engaged in their customary Trump-fluffing when co-host Pete Hegseth replied to a question about why North Korea’s leader, Kim Jong Un, would agree to meet with Trump. His first response was that Kim “wants a picture with the American president.” And if you think that was about as idiotic as this program can get, you aren’t giving them enough credit. Hegseth continued to speculate as to Kim’s innermost thoughts (video below):

“The guy who wants to meet with Dennis Rodman and loves NBA basketball and loves western pop culture, probably doesn’t love being the guy that has to murder his people all day long. Probably wants some normalization.”

So there you have it. Kim is just a misunderstood pop culture fan who revers human rights but has been forced into being a homicidal madman by circumstances out side of his control. We’ve all been there. Kim really doesn’t enjoy being a murderous dictator and he’s just been waiting for someone like Donald Trump to come along and free him from this nightmare. Leave it to Fox and Friends to figure this out while the rest of the “fake News” is distracted by Trump’s treasonous criminality and the failures and corruption of his administration.

For the record, Hegseth is close to the President, who reportedly calls him during White House meetings to get his opinion. Trump even considered appointing him to lead the Veterans Administration, a job for which Hegseth has zero experience. However, he and Trump share a fondness for sexual misconduct over which they would surely bond.

Believe it or not, it’s possible to be a partisanly biased news network without justifying oppressive tyrants. But Fox News is so bent over backwards for Trump that they will actually soft-pedal assassinations of political opponents (see Vladimir Putin). Their determination to find something positive for Trump, no matter how repulsive the situation, is the undisputed priority for these fawning bootlickers. It’s how they can forgive Trump for his innumerable affairs and sexual harassment and abuse. It’s why they are comfortable with his pathological lying. And it’s their way of sustaining their adoration of a vulgar ignoramus who seeks his own authoritarian kingdom over which he can rule.