The media is buzzing over the surprise cancellation of Roseanne. Not that it wasn’t warranted, just that corporations making a fortune off of disgusting celebrities usually find ways to justify preserving their revenue stream. ABC deserves credit for doing the right thing in this case. 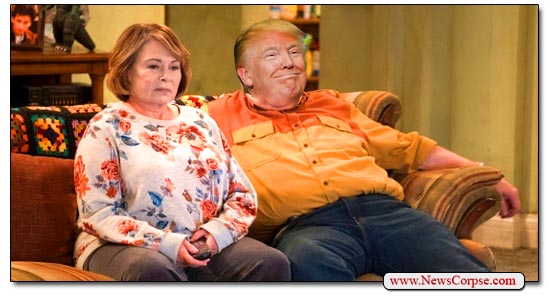 Roseanne’s tweet on Tuesday was about as repulsive an act of overt racism as you’re ever likely to see by such a well known pubic figure. The deleted tweet likened former Obama advisor Valerie Jarrett to an ape. That isn’t a joke, as Roseanne tried to use as an excuse. It’s a window into her rotting soul. It’s no wonder that ABC’s announcement of the cancellation referred to Roseanne’s remarks as “abhorrent, repugnant and inconsistent with our values.” Even her co-star and producer, Sara Gilbert, blasted Roseanne for the comments that have made them all unemployed (which sadly includes many innocent people in the cast and crew).

But Roseanne’s racism doesn’t exist in a vacuum. She is a player in of the Age of Trump wherein bigots have become emboldened to proudly proclaim their foul prejudices. She is comfortable enough to not only entertain these thoughts, but to say them out loud. It is a state of mind that is emblematic of professional racists like David Duke and the Ku Klux Klan – and Donald Trump.

The difference between Roseanne and Trump, however, is that she is subject to her show being cancelled as a consequence of her nauseating behavior. But Trump still resides in the White House despite having done the same thing as Roseanne, only many times more and often worse. His five year obsession with the racist lie that Barack Obama was born in Kenya, and thus ineligible to be President, was what Trump used to boost his political aspirations. His speech announcing his candidacy was rife with bigoted expressions about Latinos.

And if all of that weren’t bad enough, Trump courted and embraced the support of virulent racist and neo-Nazi groups. He retweeted memes from Klan-affiliated people and Hitler supporters. He even called fascist protesters in Charlottesville “fine people.”

These are sentiments that Trump and Roseanne share. They both have toxic personalities with malicious intent. Earlier on Tuesday Roseanne was posting horrendous lies about Chelsea Clinton and George Soros. She first stated falsely that Chelsea was married to a Soros nephew. After being corrected by Chelsea, Roseanne made heinous allegations about Soros working with the Nazis. That’s not only untrue, it’s stupid in the extreme. Soros was a thirteen year old Jewish refugee at the time. But that didn’t stop Don, Jr. from retweeting Roseanne’s bile.

It’s no wonder that Trump and Roseanne get along so well. They have bonded in the same way that Klan members do. They have all the same mental deficiencies and hate all the same people. It will be interesting to see how Trump responds to his friend’s cancellation. Will he defend her and attack the “liberal” media? Will he accuse Obama and his “Deep State” cabal of having gotten her fired? Or will he say nothing at all about her repulsive comments, thereby giving them his passive approval?

One more thing: ABC Television is owned by the Walt Disney Company. Disney is currently trying to complete the acquisition of 21st Century Fox (most of the entertainment businesses, not including Fox News). Will Trump intercede to block the acquisition as he has done with AT&T and Time Warner? He is certainly that spiteful and unconcerned about the law. Stay tuned.

UPDATE: Trump held a rally in Nashville Tuesday night and never mentioned Roseanne. And he hasn’t tweeted anything in over 20 hours. Apparently he isn’t offended by his fellow racist’s comments. Plus, Roseanne has been tweeting up a storm after saying that she was leaving Twitter. Including several affirmations of her disgusting lies about Soros. Also, I facetiously speculated that Trump might blame Obama for Roseanne’s cancellation. But Roseanne herself did so, retweeting this:

UPDATE 2: Trump finally responded by whining about not getting his own apology from ABC “for the HORRIBLE statements made” about him.” Poor thing. That’s because all of the horrible things said about him are true. But while obsessing over himself (as usual) he said nothing critical about Roseanne’s racist remarks. And that’s because he probably agrees with them.

Bob Iger of ABC called Valerie Jarrett to let her know that “ABC does not tolerate comments like those” made by Roseanne Barr. Gee, he never called President Donald J. Trump to apologize for the HORRIBLE statements made and said about me on ABC. Maybe I just didn’t get the call?

2 thoughts on “Roseanne vs. Trump: You Can Lose Your Job If You’re a Racist – Unless You’re the President”