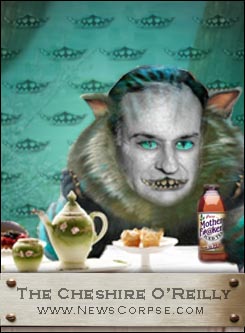 If there is one thing that Bill O’Reilly (and the rest of the Fox News gang) has going for him, it’s that he doesn’t have to try very hard to slip bullshit past his viewers. They are unlikely to catch even the most obvious examples unless he deliberately points it out.

Case in point, O’Reilly went to great lengths to respond to criticism of one of his questions to President Obama during the Superbowl interview. The question he asked the President was:

“Does it disturb you that so many people hate you? It’s a serious question. They hate you.”

O’Reilly was incensed that anyone would have the effrontery to disparage his inquiry or his fairness. And he was certain that he could vanquish his critics with evidence that he asked the exact same question of former President George Bush:

“The people in the press hated you. A lot of them. Why?”

Of course, to an observer with a functioning brain stem, the questions were not really all that similar. First of all, Obama was faced with a question that presumed that he was hated by the American people. Bush was only asked to answer for why some reporters may have disliked him. That’s a profound difference. Secondly, O’Reilly’s tone toward Obama was accusatory as he demanded that the President explain why he was so damned unlikeable. But his demeanor toward Bush was one of sympathy and wonder as he sought grasp how anyone could think a negative thought about this good man.

What’s most interesting about this is that O’Reilly played both questions on his program tonight to defend himself against criticisms from Nancy Pelosi and others. He was actually convinced that this evidence would exonerate him. He put on his smarmiest expression and asserted in classic passive-aggressive tones that his critics were just manufacturing controversy and trying to make him, “your humble servant,” look bad. And, no doubt, his viewers ate it up.

And for that Bill O’Reilly must be grateful every day that his audience is so intellectually vacant that they can’t tell when he is being dishonest or disingenuous. It is a special gift that he has earned over years of deceiving the public and nurturing ignorance.