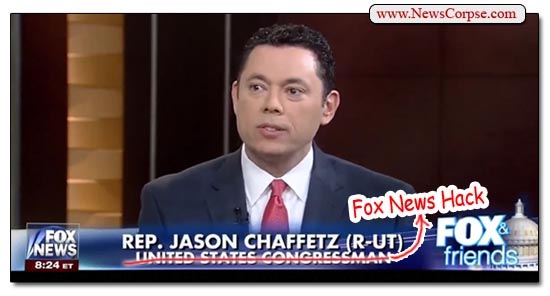 However, the door swings both ways. Rejects from the White House have become familiar faces on Fox News. In recent weeks ex-Trump aides landing at Fox include Sebastian Gorka, Anthony Scaramucci, and Sean Spicer. But one of the most prominent new Foxies is the former Republican chair of the House Oversight Committee, Jason Chaffetz. He resigned his seat in Congress and almost immediately signed up with Fox News. And his star at Fox is rising. On Thursday night Chaffetz was the guest host on Fox’s number one program, Sean Hannity.

The Chaffetz debut as a host was jarring to watch. He was the most conspicuously partisan member of Congress who presided over endless inquisitions intended to bring down Hillary Clinton’s candidacy. From Benghazi to emails to Planned Parenthood to Fast and Furious, Chaffetz was the leader of the anti-Hillary crusade. It was a purely political assault that produced no evidence of any wrongdoing whatsoever after years of costly hearings and phony investigations.

On Thursday’s episode of Hannity, Chaffetz interviewed his partner in crime, Trey Gowdy. It was Gowdy who took the gavel of the House Oversight Committee when Chaffetz retired. He was also the chair of the House Select Committee on Benghazi. So this “interview” was really just a televised reunion between two of Congress’ fiercest anti-Democratic partisans. They spent five full minutes just bashing Democratic Rep. Adam Schiff.

Then they segued to trying to discredit special counsel Robert Mueller’s probe into Trump’s collusion with Russia and obstruction of justice. From there Chaffetz led a discussion about the protester who scaled the Statue of Liberty on Independence Day. One subject that never came up was the surprise resignation of the wholly unethical and corrupt Scott Pruitt from the Environmental Protection Agency. Also not discussed were the thousands of immigrant children who are still not reunited with their parents.

The entire hour was nothing more than an extended session of the House committees they sat on in Congress. It was like watching CSPAN with better graphics and catheter commercials. And of course, only one side of every issue was offered through most of the show. It’s one thing to see Sean Hannity do the same thing every night. But when a former congressman is sitting in the anchor’s chair it just cements the impression that Fox News is not in any way differentiated from the political partisans they hype 24/7.

And what makes this even worse is that Chaffetz is probably a temporary pundit on Fox. He is widely expected to run for governor of Utah in 2020. So he’s using this platform to advance his candidacy. Which means that Fox is both paying him a healthy salary, and giving him millions of dollars of free promotion. It’s the merging of media with at least two branches of government, the legislative and the executive. And Trump is working furiously to add the judicial to the mix. That’s what is known in most other countries as a totalitarian dictatorship.

2 thoughts on “The Metamorphosis: Former GOP House Oversight Chair Fills In for Hannity on Fox News”