A couple of months ago, and only a few weeks after he left his wife and five children, Don Trump Jr. went public about his red-hot romance with Kimberly Guilfoyle, a co-host of Fox News’ The Five. The announcement presented an obvious ethical conflict by having an alleged news commentator in a relationship with the son of the President, the most covered subject in the news. Not that Fox News ever cared about journalistic ethics. Most of their commentators, hosts, and guests are openly deferential to Donald Trump, if not outright advocates (see Sean Hannity). 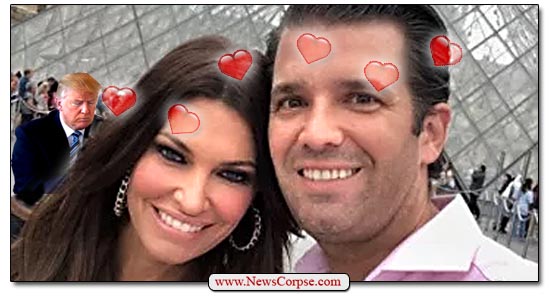 On Friday it was revealed that Guilfoyle will no longer be fluffing for daddy Trump on Fox News. There was no reason given for the separation. Neither Guilfoyle nor Trump Jr has commented as of the time of this writing. However, it is believed that she will be going to work for the pro-Trump Super PAC, America First. The only comment by Fox News was a one line farewell that said they had “parted ways.” No mention of her twelve years of service to the network, or her legal analyses, or her hosting duties. And no well wishes for her future endeavors.

Which raises questions about whether Guilfoyle voluntarily left Fox to go on the campaign trail with her boyfriend, or if Fox News had pangs of guilt over employing the paramour of the President’s progeny. Yashir Ali of the Huffington Post is reporting that there are three sources saying that she did not leave voluntarily.

UPDATE: In addition to the foregoing, there are also reports that Guilfoyle was terminated due to sexual misconduct that “included showing personal photographs of male genitalia to colleagues”

Regardless of the circumstances of her departure, it really won’t create any waves in the flow of the political universe by having a Fox News Trump flunky essentially transferring to a different division of the Trump PR enterprise. The Trump administration and Fox News are, after all, two legs of the same beast. Guilfoyle will continue doing what she has in the past, but without her own seat on the set in the Fox studio. She will even likely continue to appear on Fox News as a surrogate for her lover’s father. And she’ll be interviewed by her former colleagues in a mockery of what journalism is supposed to be. In the end, she is just another Fox Newser who has been sucked into the Trump orbit, and she can be relied upon to obediently exalt Dear Leader, just as she always has.

6 thoughts on “Was Trump Jr.’s Lover, Kimberly Guilfoyle, Forced Out of Her Fox News Hosting Gig?”