The presidency of Donald Trump has been a constant challenge for the press to keep up with his outrages, crimes, and embarrassments. The news cycle has been flooded with mostly non-newsworthy distractions that nevertheless need to be covered just to document them for the record. And then, of course, there are the legitimate stories that reveal Trump’s penchant for breaches of ethics or the law, his ignorance of the job he’s supposed to be doing, and the corrupt swampiness of his administration. 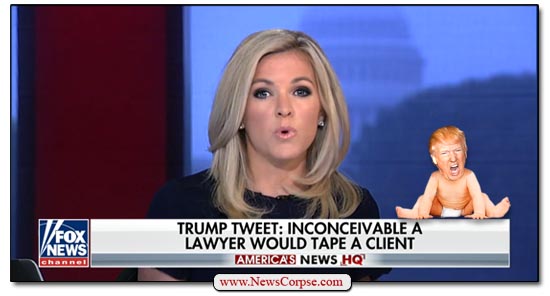 While most of the media struggles with this unprecedented journalistic dilemma, Fox News has a much easier go of it. They can just neglect to report on any event that reflects badly on the President (pretty much all of them), or invoke “whataboutism” in order to misdirect their glassy-eyed viewers with mentions of President Obama or Hillary Clinton’s emails. And that’s the approach that Fox took with Friday’s breaking news about Trump lawyer, Michael Cohen.

It was reported that Cohen had secretly recorded conversations between himself and his main client, Donald Trump. Those recordings included discussions about how to handle hush money being paid to another one of Trump’s mistresses, Playboy model Karen McDougal. The story has repercussions that extend to exposing Trump’s prior lies denying the affair, and possible campaign finance violations. The mere existence of these tapes raise speculation about what other tapes might turn up, including, perhaps, discussions about Russia aiding and abetting Trump’s campaign.

Naturally, Fox News went to great lengths to avoid any airing of these matters. It’s a blockbuster story that Fox was content to sweep under the rug. They spent a grand total of twenty-one seconds on it during Friday’s primetime programs that feature devoted Trump-fluffers Tucker Carlson, Laura Ingraham, and Sean Hannity. And they would likely have left it at that had not Trump himself escalated the issue with a manic tweet on Saturday morning:

Inconceivable that the government would break into a lawyer’s office (early in the morning) – almost unheard of. Even more inconceivable that a lawyer would tape a client – totally unheard of & perhaps illegal. The good news is that your favorite President did nothing wrong!

What’s “inconceivable” is how much Trump can lie in the space of 240 characters. First of all, the government did not “break into” his lawyer’s office. they were executing a judicially authorized search warrant. Cohen himself described the FBI agents as “extremely professional, courteous and respectful.” Secondly, it is not “unheard of” for a lawyer to record conversations with a client or other persons while representing a client. It is unusual for those recordings to become public, but that only occurs when there is a criminal investigation in progress where they become evidence. Third, it is entirely legal in the state of New York to record a conversation as long as at least one person in the recording grants permission. In this case that’s Cohen.

Finally, the most absurd part of this masterfully absurd tweet is Trump’s conclusion that “The good news is that your favorite President did nothing wrong!” Anyone with a functioning brain stem knows that Trump does virtually everything wrong. But his claim to be our favorite president is laughable. For that to be true he must be talking to only himself and maybe Ivanka. Maybe. But looked at another way, the statement might actually be true. America’s favorite president, according recent polling, really didn’t do anything wrong. Thanks, Obama. 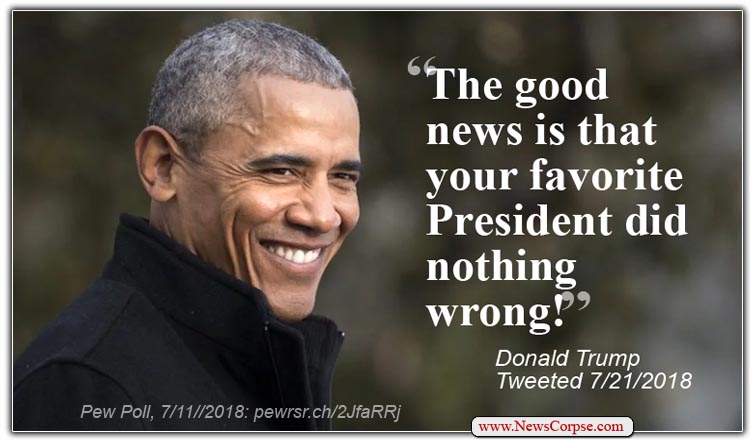