Glenn Beck has a long record of heaping scorn on the youth of America. He has accused them of having been indoctrinated by Marxists in the Obama administration. He has called them “useful idiots” because they are drawn to progress and changing the country for the better. He castigated Al Gore for having the temerity to assert that there are some things that young people know that their parents do not. To me that seems obvious (and necessary), but to Beck it is an ominous omen of doom.

The uprising in Egypt has presented another opportunity for Beck to belittle the passion and aspirations of youth. He spent several minutes of his program highlighting this soundbite from Obama’s speech to students in Michigan:

Obama: We are witnessing history unfold. The moment of transformation that’s taking place because the people of Egypt are calling for change. And they’ve turned out in extraordinary numbers…
Beck (interrupting): Listen to the way he says this.
Obama: …representing all ages and all walks of life. But it’s young people who have been at the forefront. A new generation. Your generation. Who want their voices to be heard.

This is deeply disturbing to Beck. He has a confirmed animosity toward youth that colors his perspective and produces a knee-jerk negativity aimed at young people who care about their society in America and now in Egypt as well. His analysis of the events in Egypt are summed up in this conclusion:

Beck: It will not have a singular ideology, but it will mean revolution, destruction, and change. And it will be led by young people. Because anyone over thirty knows that chaos doesn’t usually lead anyplace good.

Perhaps Beck, the historian and fan of Founding Fathers, would benefit from looking into doddering old revolutionaries like Thomas Jefferson (32 years old in 1775), John Jay (30), James Madison (24), Alexander Hamilton (20), Thomas Paine (38), and that ancient eminence George Washington (43). Are these the sort old fogies whom Beck would prefer over the children like Wael Ghonim, the thirty year old Google marketing chief who helped to organize the Egyptian protests?

Suffice to say, Glenn Beck is an idiot. This week he hollered at the critics on his lawn and told them to “Go to Hell!” because they said he was crazy. I’m not sure “crazy” goes far enough. His psychotic explanations of an imagined cabal that joins radical Muslims with American leftists was repudiated even by Beck’s right-wing pals. Yet Beck dug in his heels and warned his viewers to heed him because…

That’s right. Brand it on your head Beckoids. And know that only Brother Glenn has the divine knowledge that he generously imparts onto you, his undeserving flock. What other modern prophet could come up with this analysis of the Egyptian uprising:

Beck: It will be historic because this is an incredibly well organized uprising that was able to overthrow a dictator of thirty years in 18 days. To give you some idea, “shock and awe” lasted about that time. That’s what it took us to grab Baghdad.

It’s important to note that Beck was speaking in disparaging terms about the uprising. His reference to it being “well organized” was his way of connecting it to “community organizing,” which he abhors. But the most absurdly imbecilic part of that commentary was Beck’s negative comparison of 18 days of mostly peaceful protests by Egyptian citizens against their own oppressive government, to 18 days of deadly warfare by an invading force of Americans into Iraq, a nation that had not provoked the attack that was justified by a litany of lies.

The fact that it took 18 days of carpet bombing, and the murder of thousands of innocent Iraqi civilians, for the United States to topple Iraq’s capital city (and commence a war that is still in progress eight years later), hardly compares to 18 days of chanting and banner waiving that removed an entrenched tyrant from power. It is impossible to comprehend what significance Beck is trying to convey with this comparison.

And therein lies the justification for everyone thinking he’s crazy. But in some respects he is crazy like a Fox. His assault on youth is a coordinated campaign to appeal to his base. His audience, like that of Fox News, skews older than any other audience in cable news. And as I wrote nearly a year ago…

While Beck clings longingly to the past, he almost never addresses the future without some allusion to doom. He has predicted the end of America and democracy, the collapse of the world economy, the forsaking of decency and values, and a near-term fate that is nothing short of Armageddon. The present is just a cauldron of misery that must be grudgingly endured until the Rapture. But it is his attachment to bygone years that really defines his world view. And he may actually have a very good reason for this. 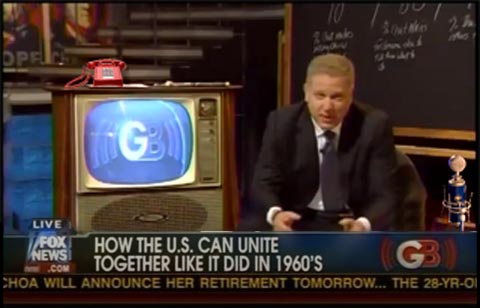 The devolutionary posture Beck has assumed is convenient from a ratings standpoint. Beck’s audience (along with the rest of Fox News and the Tea Party crowd) skews to an older demographic than the average of the nation at large. They must take comfort in the familiar icons of an analog world. Blackboards are less threatening than the computer-generated motion graphics that all the kids are into these days. And all the talk of history is just the sort of entertainment that would appeal to people rooted in the past. Add to that a touch of that old-time religion and you have a recipe for corralling the curmudgeon community who wants nothing more than for those damn kids to get off of their lawns.

That is Beck’s fan base. They enjoy reminiscing about how much better things were in their day. And the last thing they want to hear about is a future that they won’t be present to witness. It’s never good business to remind people of their mortality, particularly the people who are closest to it. Beck is adept at accommodating (manipulating?) these folks who have plenty of free time to sit at home and watch his program in the middle of the day. Sure it cuts into the early-bird special at Applebee’s, but what they hunger for is far more fundamental. It’s the solace they get from the passionate young man whose weepy patriotism validates their conviction that they were indeed the greatest generation and, dagnabbit, they’re not gonna let you whippersnappers forget it.

Now, I don’t want to go overboard with generalizations. Most senior citizens are thoughtful, rational people with a wealth of accumulated experience. Just not the ones watching Glenn Beck.

And so youth has become the enemy in Beck’s world. That’s a short-sighted strategy because the one thing we know there will always be more of is young people. And those whom Beck alienates today are not going to become more enamored of him as they grow older. I just hope we don’t have to wait for all the oldsters like Roger Ailes and Rupert Murdoch to shuffle off before we start to see more of the energetic and insightful wisdom of youth play a greater role in the society that will eventually be theirs anyway.

18 thoughts on “Why Does Glenn Beck Hate Young People?”