One of the most notable observations that historians will make about Donald Trump’s presidency is how little he engaged in any presidential activities. And this is not just a commentary on his infantile behavior, petty boorishness, and just plain ugly bigotry. He spends more time watching Fox News, golfing, and headlining staged hate festivals to feed his malignant ego and rile up his glassy-eyed cult followers, than he does presidenting. 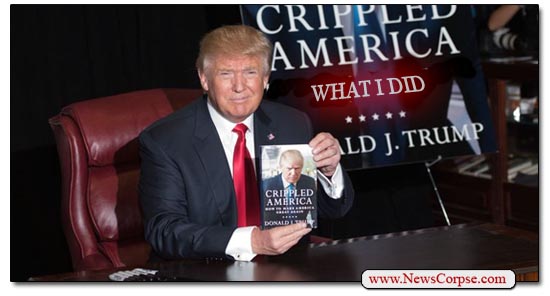 In addition to those diversions from the dreary duties of upholding the Constitution and promoting the general welfare, Trump has spent an inordinate amount of time promoting the literary aspirations of his friends. If you didn’t know better you might think he wasn’t the Commander-in-Chief, but the PR flack for a failing, right-wing publishing company.

So in order to have a record of the President’s list of books he almost certainly hasn’t read, but thinks that you ought to, here are the tomes (59 so far) for which he has exploited his White House position in order serve as the huckster for crackpot conservative authors:

“John Brennan is a stain on the Country, we deserve better than this.” Former Secret Service Agent and author of new book, “Spygate, the Attempted Sabotage of Donald J. Trump,” Dan Bongino. Thank you Dan, and good luck with the book!

Congratulations to Gregg Jarrett on his book, “THE RUSSIA HOAX, THE ILLICIT SCHEME TO CLEAR HILLARY CLINTON AND FRAME DONALD TRUMP,” going to #1 on @nytimes and Amazon. It is indeed a HOAX and WITCH HUNT, illegally started by people who have already been disgraced. Great book!

Congratulations to Judge Jeanine on the tremendous success of her new #1 best-selling book, “Liars, Leakers, and Liberals – The Case Against the Anti-Trump Conspiracy!”

.@AlanDersh, a brilliant lawyer, who although a Liberal Democrat who probably didn’t vote for me, has discussed the Witch Hunt with great clarity and in a very positive way. He has written a new and very important book…

A friend of mine and a man who has truly seen politics and life as few others ever will, Sean Spicer, has written a great new book, “The Briefing: Politics, the Press and the President.” It is a story told with both heart and knowledge. Really good, go get it!

Terrific new book out by the wonderful Harris Faulkner, “9 Rules of Engagement.” Harris shares lessons from a military family. Enjoy!

Great book just out by very successful businessman @AndyPuzder. Always known as somebody who knows how to win, “Capitalist Comeback” will be a big hit!

Ainsley Earnhardt, a truly great person, just wrote a wonderful book, “The Light Within Me,” which is doing really well. She is very special and so is her new book…bring it to number one!

.@HowieCarrShow just wrote a book which everyone is talking about. He was a great help. He is a veteran journalist who had a great influence in NH and beyond. He calls it the most amazing political campaign of modern times. The book is called, “What Really Happened.” Enjoy! #MAGA pic.twitter.com/jYhjpoJKHe

“The Faith of Donald Trump,” a book just out by David Brody and Scott Lamb, is a very interesting read. Enjoy!

Congratulations to two great and hardworking guys, Corey Lewandowski and David Bossie, on the success of their just out book, “Let Trump Be Trump.” Finally people with real knowledge are writing about our wonderful and exciting campaign!

Go get the new book on Andrew Jackson by Brian Kilmeade…Really good. @foxandfriends

A great book by a great guy, highly recommended! https://t.co/3jbDDN8YmJ

As a tribute to the late, great Phyllis Schlafly, I hope everybody can go out and get her latest book, THE CONSERVATIVE CASE FOR TRUMP.

.@AnnCoulter's new book, 'In Trump We Trust, comes out tomorrow. People are saying it's terrific – knowing Ann I am sure it is!

I highly recommend the just out book – THE FIELD OF FIGHT – by General Michael Flynn. How to defeat radical Islam.

New book by @ericbolling is absolutely terrific and a must read! #WakeUpAmerica

In just out book, Secret Service Agent Gary Byrne doesn't believe that Crooked Hillary has the temperament or integrity to be the president!

A great new book has been written about Crooked Hillary. Read it & you will never be able to vote for her. @Ed_Klein https://t.co/ujDwSSFhbx

Great job on Fox this morning @KatiePavlich. I am sending out for your book immediately. Thank you very much!

Just received a copy of @SarahPalinUSA new book — a great read! Sarah is a terrific person.

Congratulations to Tucker Carlson on the great success of his book, “Ship of Fools.” It just went to NUMBER ONE!

Great new book out, “Mad Politics: Keeping Your Sanity in a World Gone Crazy” by @RealDrGina Loudon. Go out and get your copy today — a great read!

Victor Davis Hanson was a very good and interesting guest of Mark Levin on @FoxNews. He wrote a highly touted book called “The Second World Wars” and a new book will soon be coming out called “The Case For Trump.” Recommend both. @marklevinshow

Sebastian Gorka, a very talented man who I got to know well while he was working at the White House, has just written an excellent book, “Why We Fight.” Much will be learned from this very good read!

.@SteveScalise has written an absolutely fascinating book (BACK IN THE GAME) on the world of D.C. politics, and more. He has experienced so much, in a short period of time. Few people have had his bravery or courage, and he has come all the way back. A big power and great person!

.@StephenMoore and Arthur Laffer, two very talented men, have just completed an incredible book on my Economic Policies or, as they call it, #TRUMPONOMICS….

Great new book by Dr. Robert Jeffress, “Choosing the Extraordinary Life.” Get it and enjoy! @LouDobbs

A great new book just out, “Game of Thorns,” by Doug Wead, Presidential Historian and best selling author. The book covers the campaign of 2016, and what could be more exciting than that?

“After The Flight 93 Election, The Vote That Saved America – And What We Still Have To Lose,” by very talented Michael Anton, is a terrific read. Check it out!

.@SenMikeLee of the great state of Utah has written a wonderful new book entitled, “Our Lost Declaration.” Highly recommended!

Our great Senator (and Star) from the State of Arkansas, @TomCottonAR, has just completed a wonderful book, “Sacred Duty,” about Arlington National Cemetery and the men and women who serve with such love and devotion. On sale today, make it big!

My new book “Exonerated: The Failed Takedown of President Donald Trump by the Swamp” blows the doors off of the scheme to destroy the Trump presidency. It will scare you and enlighten you at the same time.

Word is out that book is GREAT! https://t.co/mTA1xcz9eQ

New book just out, “The Real Deal, My Decade Fighting Battles and Winning Wars With Trump,” is really wonderful. It is written by two people who are very smart & know me well, George Sorial & Damian Bates, as opposed to all the books where the author has no clue who I am. ENJOY!

Great new book, “Justice On Trial, The Kavanaugh Confirmation and the Future of the Supreme Court.” Fantastic job by Mollie Hemingway and Carrie Severino!

“Taken for Granted,” a wonderful new book by Gianno Caldwell on how Conservatism can win back the Americans that Liberalism failed, has my full Endorsement!

Good luck with the book George, should do well! https://t.co/Rdti0VyFLd

Go out and get Andrew McCarthy’s new book, “Ball of Collusion.” “Supervision became the investigator, and when they pushed the envelope, there was nobody there to tell them NO. It goes right to the President (Obama). Plenty of information that Obama was informed & knew exactly…

Check out a FANTASTIC new book, “STILL WINNING – Why America Went All In On Donald Trump-And Why We Must Do It Again” by the great writer, @CharlesHurt. An excellent read. Thank you!

Our great @JudgeJeanine has just written a book that will add to the tremendous success of her last number one best seller. It’s called, “Radicals, Resistance, and Revenge, The Left’s Plot To Remake America.” It is a FANTASTIC book. Go get it! @foxandfriends

Great new book by the brilliant Andrew McCarthy, BALL OF COLLUSION, THE PLOT TO RIG AN ELECTION AND DESTROY A PRESIDENCY. Get it, and some other great new books which I will soon be recommending. They tell you about the Crooked Pols and the Witch Hunt that has now been exposed!

A great book by a brilliant author. Buy it now! https://t.co/L8XC5Nnj4N

Book is doing really well. A study in unfairness to a potentially great Justice! https://t.co/i6GwghuEsU

Senator Rand Paul just wrote a great book, “The Case Against Socialism” which is now out. Highly recommended – as America was founded on LIBERTY & INDEPENDENCE – not government coercion, domination & control. We were born free, and will stay free, as long as I am your President!

A great new book just out, “The Plot Against the President. The True Story Of How Congressman Devin Nunez Uncovered the Biggest Political Scandal In U.S. History.” Shows very bad and corrupt people on the other side. Check it out!

A great new book by Howie Carr, “What Really Happened, How Donald J. Trump Saved America From Hillary Clinton,” is on sale now. Howie is a talented New England force who was there at the very beginning!

My son, @DonaldJTrumpJr is coming out with a new book, “Triggered: How the Left Thrives on Hate and Wants to Silence Us” – available tomorrow, November 5th! A great new book that I highly recommend for ALL to read. Go order it today!

Joe Ricketts, one of our Country’s most successful businessmen, including being the owner of the Chicago Cubs, has just written a great new book, THE HARDER YOU WORK, THE LUCKIER YOU GET. So true! Much can be learned from Joe. Go get the book!

This is a great book, a must read! https://t.co/bwpNVi5hpY

Amazon Calls 'Profiles in Corruption' the 'Most Anticipated' Nonfiction Book https://t.co/sOQcs3OHS4 via @BreitbartNews

And of course there’s this work of dystopian fear mongering that launched Trump’s campaign:

I think everyone will like my new and very successful book, Crippled America. Go get it and let me know what you think!

You might notice something that these books have in common. Most of them are either slobbering suck ups to Trump or blithering attacks on his critics. Apparently Trump doesn’t read anything that isn’t about himself. Even so, no thoughtful person will believe that Trump, who can’t be bothered to read a three page national security briefing (unless it’s filled with pictures and positive references to himself), actually read all of these snoozers. And it’s also interesting to note that eight of these books are by people associated with Fox News. That must be part of the contract Trump has with the network. They slavishly advance his candidacy and administration, he sells the cheesy, unreadable books their shills write.

For a collection of books that are more enlightening, truthful, and that can have a more positive impact on the nation going forward, visit the News Corpse Recommendations page on Amazon. You’ll find some some truly valuable contributions to the contemporary political discourse, including my own (like the one below).

UPDATE: In addition to the books above that Trump is pimping, there are others that he harshly criticizes. But none more so than the book by veteran investigative journalist Bob Woodward: Fear: Trump in the White House. As of mid-September he has posted a record nine tweets warning Trump’s cult followers to avoid this singularly dangerous opus.