Remember when America had a president who wasn’t an infantile jerkwad who threw around insults at anyone he happened to hate at the moment? When we had a respectable leader who filled you with pride and confidence in the future. It seems like ages ago, but the memory lingers and the hope of returning to that reality persists. But for the time being we’re stuck with Donald Trump. 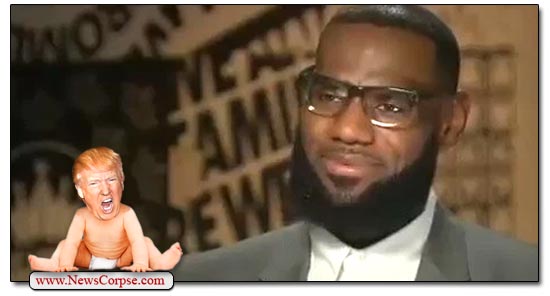 In a late night mental breakdown, Trump posted a disgustingly insulting tweet that demonstrates just how loathsome he is. And he’s following in the footsteps of one of his bigoted Fox News idols, Laura Ingraham, who did a whole segment on why LeBron James should “shut up and dribble.” But Trump’s tweet was confirmation that he’s a racist with the emotional maturity of newborn gnat.

Lebron James was just interviewed by the dumbest man on television, Don Lemon. He made Lebron look smart, which isn’t easy to do. I like Mike!

First of all, there is no contest as to who is the dumbest man on television. It’s Donald Trump by leaps and bounds. In fact, this tweet is proof of it. For one thing, Lemon did not just interview LeBron James. The interview was four days ago. Is Trump really that slow? What’s more, the interview was a compelling look into the life of James and his selfless efforts to establish a school for at risk kids. Compare that to the phony “university” that Trump founded which ripped off students and broke numerous laws.

Secondly, Trump is repeating his pattern of insulting the intelligence of accomplished African-Americans. He has questioned the academic credentials of President Obama. He frequently refers to Congresswoman Maxine Waters as having a low IQ. And now he calls both Don Lemon of CNN and LeBron James dumb. But how would Trump know with his inability to comprehend the complexities of an Archie comic book? These are two of our nation’s most successful African-Americans who have excelled in their fields. Trump has only excelled at inspiring Nazis and Klan members to chant mindlessly at his cult rallies.

Apparently Trump was triggered by some brief and rather tame criticisms James made in the interview. When Lemon asked what he would say if he were sitting across from Trump, James said diplomatically that “I wouldn’t sit across from him.” Imagine the self-control he had to exercise to keep from saying something overtly derogatory, which Trump would have more than deserved. Nevertheless, Trump flew off the handle and fired off his blithering insults. But Trump’s senile dementia prevents him from recalling what he has said in the recent past about James and Lemon:

Congratulations to @KingJames on winning Athlete of the Year in last night’s @ESPYS. LeBron is also a great guy!

As for the final few words of this nauseating tweet, Trump added an insincere “I like Mike.” He may think that people will see that as evidence of his appreciation for Michael Jordan, another renowned African-American athlete and citizen. But don’t be fooled. He’s surely talking about Mike Pence. And Jordan had some harsh words for Trump’s divisive attack on sports figures who dare to exercise their right to free speech:

“One of the fundamental rights this country is founded on was freedom of speech, and we have a long tradition of nonviolent, peaceful protest. Those who exercise the right to peacefully express themselves should not be demonized or ostracized.

“At a time of increasing divisiveness and hate in this country, we should be looking for ways to work together and support each other and not create more division.”

And this just in: Jordan is supporting LeBron. Plus, Trump is doing one of his hate rallies in Ohio today (LeBron’s home state). I’m sure everyone who loves and admires LeBron will be waiting for him. Also, Melanie is trolling her imbecile husband by praising Lebron. And if you need to get the bad taste of Trump’s sickening bigotry out of your mouth, below is Don Lemon’s insightful and entertaining interview with LeBron James.

And now there’s this from Don Lemon: