Saturday saw the passing of one of the most storied and respected members of Congress in this generation. John McCain was an irascible political pugilist who managed to nurture close friendships with almost everyone with whom he did battle. And he did battle with everyone. His maverick status may have been an overwrought marketing scheme, but he did have a tendency to skirt partisan divides more frequently than most of his colleagues. 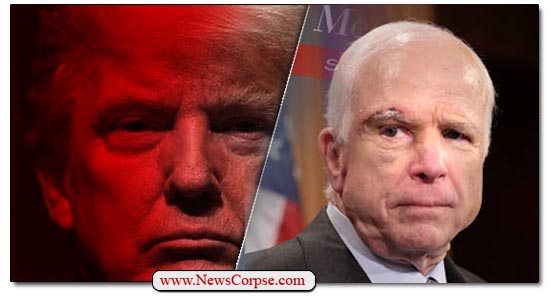 Consequently, he earned the respect, admiration, and affection of his congressional peers. The remembrances expressed in the past twenty-four hours have been uniquely non-partisan, especially by today’s Trumpian standards. Naturally, McCain’s passing brought out kind words and loving thoughts from Republicans who regard him as an elder statesman. But he has also been lauded with effusive praise by President Obama, Hillary Clinton, Joe Biden, Al Gore, Nancy Pelosi, Bernie Sanders, and many more from the ranks of Democrats.

The tributes generally include recognition of his valiant and selfless service to the nation as a Navy officer and a public servant for more than thirty years. They cite his courage, integrity, honor, perseverance, collegiality, fairness, and above all, putting his principles and his country before himself or his party. And those saluting him specifically used those words to described his enduring legacy. The only prominent Republican who failed to do so was Donald Trump, whose curt tweet offered only obligatory condolences, but said nothing at all about the man or his life’s work.

My deepest sympathies and respect go out to the family of Senator John McCain. Our hearts and prayers are with you!

Compare that to the more fully realized sentiments of the man who defeated McCain for the presidency:

Our statement on the passing of Senator John McCain: pic.twitter.com/3GBjNYxoj5

All of these accolades may seem customary under the circumstances when a notable public figure meets his destiny. But on reflection, it’s hard to imagine the same measure of esteem being shown toward any of McCain’s GOP pals were they to expire. Does anyone think that Mitch McConnell would be eulogized with words like courage, integrity, or honor? What about Paul Ryan? Or Jim Jordan? Or Chuck Grassley? Or Kevin McCarthy? Or John Cornyn? Or Mike Pence? Or (do I have to say it) Donald Trump?

What ever one thinks of McCain’s politics, he actually does represent a bygone era of bipartisanship that the GOP has been chipping away at for years. And with the emergence of Trump, the demolition crew has really stepped up their efforts to shred whatever fragile veil of unity has managed to survive.

As a result, it may be a while before America sees another passing of a Republican who garners such near universal praise. Maybe some of the GOP leaders in Congress and elsewhere should start to think about their own legacies and whether they would like to be remembered as heroes or narrow minded zealots.

This applies especially to those who can look the other way as Trump exacerbates partisan divisions, incites racial hatred and misogyny, puts the wealthy and corporations above everyday citizens, and worst of all, kowtows to foreign dictators and sells out the nation to our enemies. Support for that sort of anti-American agenda is unlikely to win over the hearts and minds of grieving Americans once you cast off your mortal bounds. Something to consider.

3 thoughts on “Paying Tribute: Would Anyone in Trump’s Republican Party Be Remembered Like John McCain?”