With everything that is going wrong for Donald Trump lately, it’s clear that the pressure is taking a serious toll on his already sorely inadequate comprehension skills. The average person would be feeling the heat if confronted with disastrous scenarios like having your campaign chairman (Paul Manafort) and personal attorney (Michael Cohen) convicted of multiple felonies. And add to that your friends (David Pecker, publisher of the National Enquirer) and close associates (Allen Weisselberg, CFO of your business) being granted immunity by federal prosecutors in order to testify against you. 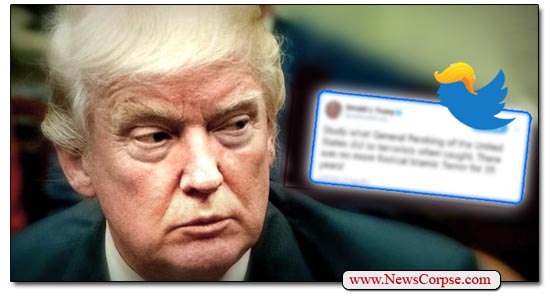 But for someone who has severe mental deficiencies in the first place, the consequences are magnified geometrically. That’s the state that Trump finds himself in now, and the result is frightening. On Sunday evening he posted a tweet intended to excite his glassy-eyed followers and to pump up his gargantuan ego:

Over 90% approval rating for your all time favorite (I hope) President within the Republican Party and 52% overall. This despite all of the made up stories by the Fake News Media trying endlessly to make me look as bad and evil as possible. Look at the real villains please!

The media doesn’t need to make Trump look evil. And let’s just set aside that he felt it necessary to disseminate this self-exalting message on the day that saw multiple people get shot in Jacksonville, Florida. Trump said nothing about that. It’s also the day after the passing of Sen. John McCain, who Trump neglected to pay any tribute to for his decades of service to the nation. Instead he played golf at one of his resorts and had his press secretary release a statement that he was “monitoring” the Jacksonville situation. Which means he was watching Fox News.

However, what’s really astonishing about trump’s boastful tweet is that he couldn’t even get the numbers right. Yes, the poll by the Wall Street Journal and NBC News (who are, in his opinion, fake), did find that ninety percent of Republicans have a favorable view of the President. Trump may like that, but it should be a serious embarrassment to the Republican Party. What Trump failed to report accurately was his overall approval rating, which he said was fifty-two percent. The only problem with that is that’s actually his disapproval rating in the poll. His approval is only forty-four percent.

If this is the level of accuracy that we can expect from our president, then America is in deep, deep trouble. Especially coming from someone who thinks there were millions of people at his inaugural address (there weren’t). Or that three million people voted illegally (they didn’t). Or that he won the women’s vote in 2016 (just white women). Or that U.S. Steel is opening six new plants (actually it’s zero). And this could go on endlessly with all of the lies that Trump regularly tells about his imaginary accomplishments.

Unfortunately, this isn’t really that funny. If Trump can’t get the simplest numbers right about polls or the attendance at his cult rallies, how can he be expected to get the numbers right about the economy or the quantity of nuclear weapons in the arsenals of the United States and its enemies? This sort of cognitive infirmity poses serious risks for our nation. And it’s just more proof that Trump is unfit to be in any position of leadership.

2 thoughts on “Daffy Donald Trump Mistakenly Tweet-Brags His 52% Approval, But That’s His Disapproval”