On Friday Sen. Jeff Flake monkey wrenched the Republican’s plan to “plow through” the Brett Kavanaugh confirmation and install an accused rapist on the Supreme Court. Donald Trump tried for weeks to forestall any effort to get at the truth by having the FBI supplement their background check with this new information. But Flake’s refusal to vote for Kavanaugh without such a probe forced Trump and the GOP to back down. 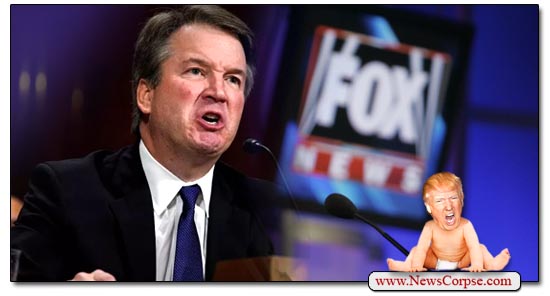 The FBI is likely to conduct a fair and professional investigation into the allegations of Christine Blasey Ford. But they might also report on other matters that reflect on Kavanaugh’s suitability to get this lifetime appointment. That could include shady financial dealings, unsavory personal associations, or lying to the FBI or to Congress.

Consequently, Fox News has sprung into action to try to prophylactically inoculate Kavanaugh from whatever bad news might emerge. They have been furiously campaigning on Kavanaugh’s behalf and viciously maligning his critics, including Dr. Ford. As part of that effort they invited Republican Sen. Bill Cassidy to visit with the “Curvy Couch” potatoes of Fox and Friends to flood the zone with some obvious distractions. It began with co-host Griff Jenkins asking Cassidy to walk him through what’s coming next. Cassidy replied:

“This is part of a broader Democratic strategy to coordinate in that coordination, seek to delay. How many more charges can be brought out to smear this man? To create legitimate doubts in the minds of some, the American public? It’s a tactic of coordination leading to the delay. There’s other things the FBI should to do, but it should investigate whether there is this intent to coordinate the actual coordination.”

Jenkins was impressed with Cassidy’s blubbering nonsense saying “Well, that’s a great point you bring out.” Which point? The one about Democrats seeking to coordinate their coordination, or the coordinating of the coordinates that the Democrats intended to investigate? That’s not important – or intelligible. Jenkins then tried to expand the discussion by inquiring whether the FBI should investigate who leaked Dr. Ford’s letter? And Cassidy responded:

“There’s at least two senators that challenged Judge Kavanaugh’s assertion that this is part of a coordinated effort. Two. Now if they’re trying to cast doubts upon his judgement, I actually think he showed insight. Let’s actually investigate. Ask Dianne Feinstein, under oath, did she leak it, then ask her aides. By the way, we should also seek to get Dr. Ford’s therapist’s records. […] That should also be looked at to see if it does truly corroborate. Because that’s all that’s been offered by her side. And then look at this pattern of delay, coordination and obfuscation.”

Cassidy is parroting the crackpot conspiracy theories that Kavanaugh tried to foist on the nation via his totally baseless and paranoid accusations that Democrats are conducting is “a calculated and orchestrated political hit” as “revenge on behalf of the Clintons.” All of the questions he asked about Sen. Feinstein have already been answered and proven to be above board and uncontroversial.

However, it’s Cassidy’s insistence that the FBI needs to probe political coordination by Democrats that is truly mind-boggling. And not just because he’s laughably incoherent. But because, even if it’s happening, it isn’t illegal, unethical, or unusual. Cassidy is attempting to criminalize ordinary activities by political parties to advance their objectives. But only as it applies to Democrats.

If Cassidy thinks that Democrats should be investigated for this, would he also agree to investigate Trump and the GOP and Fox News for their coordinated efforts to get Kavanaugh confirmed and smear his accusers? Now THAT would be fun, and probably turn up some real crimes. So bring it on.