Here’s another item for the “Just when you thought Donald Trump hit rock Bottom” file. As the battle for the confirmation of Brett Kavanaugh stumbles drunkenly to a close, the President assumed his post at the Twitter machine to bellow like the old man shaking his tiny fist at the clouds. His latest display of social mediangst managed to squeeze a surprising quantity of ignorant hostility into a single tweet.

The inspiration for Trump’s twitteruption was, as usual, something he saw on Fox News. Their allegedly business host, Maria Bartiromo, was interviewing Chuck Grassley about the American citizens protesting Kavanaugh’s nomination when she asked him, “Do you believe that George Soros is behind all of this?” He isn’t. But Grassley obediently said that he does. More importantly, Trump posted this tweet a little more than an hour later:

The very rude elevator screamers are paid professionals only looking to make Senators look bad. Don’t fall for it! Also, look at all of the professionally made identical signs. Paid for by Soros and others. These are not signs made in the basement from love! #Troublemakers

If this appeared under the name of any other public figure you might be tempted to triple check that it wasn’t a satirical fake. But sadly for the nation, it fits Trump’s personality perfectly. He actually is the sort of tone deaf cretin who would call sexual assault survivors “very rude elevator screamers.” He has no perception that his characterization of women screaming might reflect on the real life reactions they have had to their violent experiences in their bedrooms, their offices, on street corners, in cars, and even in elevators. What on Earth was he thinking when he posted that?

And if that weren’t bad enough, Trump also dismissed the horror these victims faced by calling them “paid professionals” without any evidence to support that charge. But he still wasn’t done making a total ass of himself. He then had to assert that the source of the alleged payments was George Soros, a Jewish holocaust survivor who suffered as a child under Nazi occupation. What might really upset Trump is the fact that Soros later went on to become a real billionaire whose assets are more than triple Trump’s. And the fact that he’s a philanthropist who dedicates hundreds of millions of dollars to making the world more free must really gnaw at Trump, who is famoulsy known as the world’s least charitable billionaire.

Finally, Trump’s tweet made a ludicrous point about the signs held by citizens at the Kavanaugh protests. Most of them were of the handmade variety, but there were some that had been provided by non-profit organizations opposing Kavanaugh’s confirmation. However, Trump focused on the pre-printed signs as a means of dismissing the genuine expressions of opposition to putting an accused sex offender, liar, and ultra-partisan fruitcake on the Supreme Court. He said that “professionally made identical signs” are somehow less sincere than the “signs made in the basement from love.” By which I assume he means these ones: 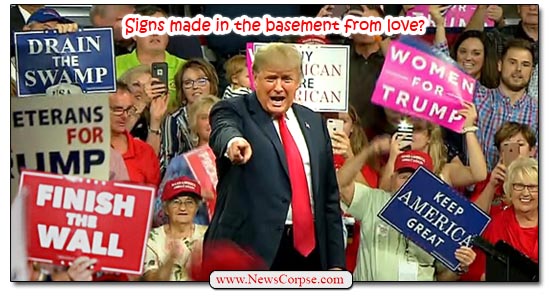 Don’t fall for it! Trump hasn’t said who pays for the signs at his cult rallies. Nor has he released his tax returns; or disclosed the funds he’s received from foreigners and special interest groups who stay at his hotels; or disputed the New York Times story about his decades of being a tax cheat. He hasn’t even come clean about all the money he’s paid to silence women that he has abused. But now he’s trying to put his hand over the mouths of the women finally speaking out about the epidemic of sexual assault. That’s something he probably learned from Brett Kavanaugh.