On this Day of National Mourning in honor of George H.W. Bush’passing, Donald Trump couldn’t help himself as he learned that he wasn’t the center of attention. So he took to Twitter to post an homage to himself in the form of a meme that boasted about his approval rating. Unfortunately, it was from a poll by the worst, most biased pollster in America, Rasmussen. 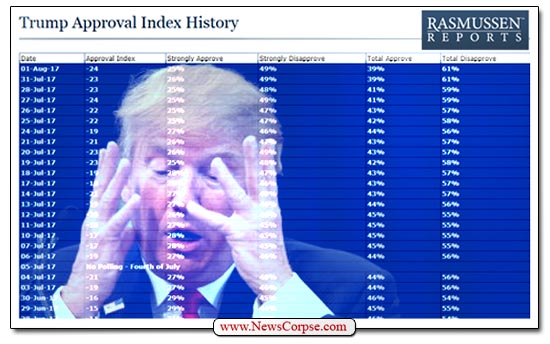 The egocentricity of Trump’s behavior is, sadly, all too typical. In fact, the message that he posted with the meme was identical to one that he posted a couple of months ago. And the situation was so similar that the article published on News Corpse then can be reposted now with very few changes. Therefore, here it is with the changes in bold:

Nothing is more predictable from Donald Trump than his knee-jerk tributes to himself and any “positive” news regarding him. Unfortunately, given his penchant for screw ups, gaffes, and policies that are roundly rejected by most Americans, he has precious few opportunities to boast. But that doesn’t stop him from doing it anyway, even when the news is bad.

On Wednesday evening Trump tweeted a valentine to himself in the form of a poll result that showed him with a fifty percent approval rating. To brag about a rating that only puts you at even illustrates just how desperate Trump is for anything upbeat he can promote to mitigate the tsunami of bleakness that surrounds him. But to rest his gloating on a poll by Rasmussen, the most disreputably partisan pollster in America, just makes him seem all the more pathetic. Particularly when that same poll shows Trump with a forty percent “strongly disapprove” rating and only thirty-five percent “strongly approve.”

Trump frequently alerts his Twitter cult followers when Rasmussen spikes a bit. Never mind that the numbers always take a dive shortly thereafter. Here are some recent examples from just this year alone, including today’s:

.@Rasmussen_Poll just came out at 48% approval rate despite the constant and intense Fake News. Higher than Election Day and higher than President Obama. Rasmussen was one of the most accurate Election Day polls!

Rasmussen just came out at 51% Approval despite the Fake News Media. They were one of the three most accurate on Election Day. Just about the most inaccurate were CNN and ABC News/Washington Post, and they haven’t changed (get new pollsters). Much of the media is a Scam!

Rasmussen just announced that my approval rating jumped to 49%, a far better number than I had in winning the Election, and higher than certain “sacred cows.” Other Trump polls are way up also. So why does the media refuse to write this? Oh well, someday!

Trump’s characterization of Rasmussen as an accurate pollster is wildly off the mark. The survey experts at FiveThrityEight give Rasmussen a C+ rating. They rank ABC/Washington Post at A-Plus. And in every case, the numbers celebrated by Trump above declined in the days following his boast. There’s no reason to think that they won’t do the same tomorrow.

For the record, the RealClearPolitics average poll of polls has Trump with a 43.4 percent approval. And excluding the Rasmussen outlier, the range is from thirty-nine to forty-six (with Rasmussen scoring the high end). That’s nothing to brag about. But Trump is determined to gaslight America with phony numbers and incoherent analyses. Just like his insistence that he had the biggest inauguration crowd in history, or the steepest tax cut ever, or big hands. Or even his “very, very large a-brain.”

2 thoughts on “Deplorable! Donald Trump Takes a Break From the Bush Funeral to Brag About His Pitiful Polling”