It seems that every time Donald Trump does something, he reminds the country – and the world – that he is incurably idiotic, self-absorbed, and uninterested in the welfare of America or its citizens. How else could he nominate Heather Nauert, formerly of Fox News, to become the United States Ambassador to the United Nations? 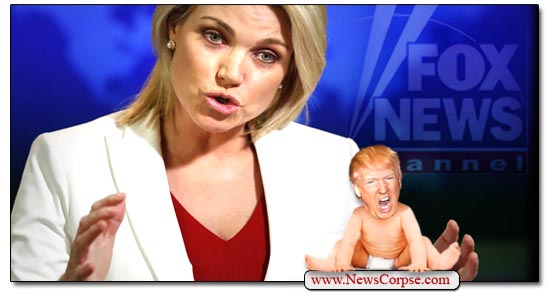 Just a little over a year ago Nauert was reading news headlines on Trump’s favorite Fox News program, Fox and Friends. She has a degree in journalism which may have been an overqualification for her job at Fox News, but it is decidedly under-qualifying for the UN post. She has zero credentials in any diplomatic field. She hasn’t studied foreign policy, government administration, or international history. She has never held any position in diplomacy or where she would learn about the diplomatic processes of the UN.

And yet, Trump is putting her in position to negotiate with career professionals from around the world. To illustrate just how serious a hole this puts our country in, note that Russia’s UN Ambassador has thirty years of experience in the diplomatic corps, five of which were at the UN. But now she’s supposed to be able to play in the big leagues with foreign adversaries who are far superior at their jobs? That’s like making Steve Doocy Secretary of Defense. Or like making Donald Trump president of the United States.

If Nauert had any sense of duty or patriotism she would decline the nomination. She should know that her inexperience would disadvantage the U.S. in a body that is full of people who are more capable. A patriot would insist that the U.S. be represented by someone with comparable skills, knowledge, and experience. By taking the position she is willfully damaging the welfare of America’s status in the world.

But ultimately, it’s Donald Trump who is responsible for this travesty. He couldn’t care less about the prospects for the nation achieving its diplomatic goals. All he wants is a sycophant who will praise him and obey his directives. And if she’s a young blonde who used to brighten the lives of Fox’s geriatric male viewers, so much the better.

It should not be dismissed that Nauert is taking exactly the same path to her high level government job that Trump did. He was also a talking head on Fox News prior to running for president. He had a weekly segment on Fox and Friends called Mondays with Trump. And they aren’t the only two former Foxies in the White House. She joins National Security Advisor John Bolton, HUD Secretary Ben Carson, and worst of all, Deputy Chief of Staff Bill Shine. Shine was fired as Fox News president for having covered up the sexual misconduct of CEO Roger Ailes and Bill O’Reilly. So he’s a natural for Trump’s inner circle.

So Nauert is joining a team that is historically ill-equipped to perform the jobs they’ve been given. Her association with former Fox News colleagues (Sean Hannity, Laura Ingraham, Tucker Carlson, Jeanine Pirro, etc.) only makes things worse. They are now acting as Trump’s “Shadow Cabinet,” giving him media support and advice on policy. It’s a sick joke of an administration that is mirroring Trump’s own experience as a reality TV game show host. And it’s not in America’s interest. If Trump had any sense of duty or patriotism, he would resign.