It should come as no surprise that James O’Keefe is an unethical liar who produces deliberately deceptive videos to smear his political opponents. That’s been proven on many occasions. What’s surprising is that now even Glenn Beck’s web site, The Blaze, is confirming this after having analyzed O’Keefe’s latest videos attacking National Public Radio. 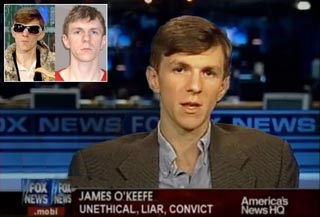 Scott Baker, Editor-in-Chief of The Blaze, published a fairly in-depth review of O’Keefe’s scam wherein he compared segments of the edited version to the original unedited source material. What he found he described in his conclusion as “editing tactics that seem designed to intentionally lie or mislead about the material being presented.” Here are some of the overt misrepresentations O’Keefe manufactured:

1) O’Keefe’s edited video portrayed NPR’s Ron Schiller as happily willing to take a donation from a Muslim Brotherhood front group. The long-form video downplays the connection to the Brotherhood, and discusses its current status as a moderate, non-violent organization.

3) The edited video portrayed Schiller as hostile to Republicans and conservatives. The long-form video shows him praising the GOP. Those remarks were completely cut out.

4) The edited video portrayed Schiller disparaging the Tea Party as racist. The long-form video shows that those remarks were actually the views of others that was describing.

6) The edited video portrayed Schiller asserting that federal funding for NPR was not necessary or desirable. The long-form video shows him going into detail about the necessity of those funds.

When Glenn Beck’s web site calls out a conservative for being unethical, there must be something seriously wrong. His lies must have been so egregious that they surpass the threshold for lying ordinarily maintained by people like Beck. Part of me worries that this whole critique of O’Keefe is a prank and that tomorrow The Blaze will reveal that they were just kidding to see if liberals like me would pick up the story. But for the time being it appears to be a legitimate thrashing of a corrupt propagandist.

Granted, The Blaze is not nearly as judgmental as I am, and much of their criticism was couched as questions, i.e. the article’s headline: Does Raw Video of NPR Exposé Reveal Questionable Editing & Tactics? Yes, it does! But they seem loathe to come right out and censure their ideological ally. Nevertheless, this damning analysis is a significant departure for a Beck enterprise. Perhaps there has been some influence from The Blaze’s new boss, Betsy Morgan, who once ran the Huffington Post.

The examples above are representative of the grossly deceptive practices that James O’Keefe, a convicted criminal, engages in repeatedly. They are further evidence that nothing he does or says deserves to be taken seriously.

This also demonstrates the crippling naivete of NPR for reacting so hastily in compelling the resignation of NPR chief Vivian Schiller. Have these people learned nothing from the Shirley Sherrod affair when an innocent person’s reputation was dragged through the mud based on fraudulently edited video? And are they oblivious to the very real harm they do by empowering jerkwads like O’Keefe?

The only attention that O’Keefe and his ilk should get when they release a video or publish a story is from the Weekly World News or Comedy Central. Responsible journalists should avoid these obvious fabrications like the plague. Why anyone in the media would afford this known liar any respect given his propensity for bastardizing the truth is beyond me. They only embarrass themselves by doing so.

And that goes for the targets of these phony stings as well. People on the left need to have much greater resolve to defend their associates and their principles in the face of vile and dishonest attacks from the right. Otherwise we are handing them unwarranted influence over the debate and cutting ourselves off at the knees. That has to stop NOW!