The conservative extremists seeking to attack working Americans and bust unions in Wisconsin, Ohio, Indiana, and really everywhere, need to understand with whom their philosophy is shared. Then they need to decide if that is acceptable. 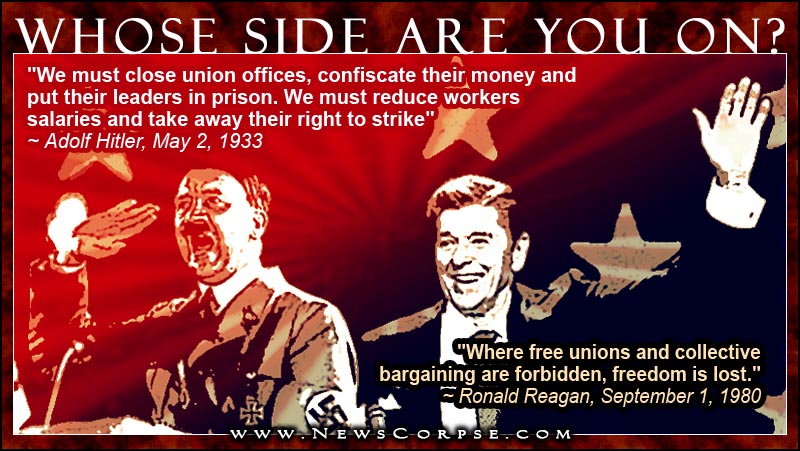 So choose a side:

“We must close union offices, confiscate their money and put their leaders in prison. We must reduce workers salaries and take away their right to strike” ~ Adolf Hitler, May 2, 1933

It doesn’t seem like a particularly difficult choice to me. I was not a supporter of Ronald Reagan. In fact, I think he did considerable harm to the country. But he was the first and only union president to be elected to the presidency of the United States. The fact that his conservative credentials are so well established makes his views on unions all the more significant and non-partisan.

Unfortunately, the knee-jerk right-wingers who profess to idolize Reagan either dismiss his support for collective bargaining or they are too ill-informed to know about it. With regard to the latter, that would be an intentional result of the media they favor. Do you think that Fox News would ever broadcast these quotes? With regard to the former, it is still intentional in that they are willingly hypocritical and obedient to the special interests who have fooled them into thinking that the welfare of billionaires is superior to their own. Just look at what they regard as Shared Sacrifice:

At some point the rank-and-file Tea Baggers need to wake up to the fact that they are being used. Corporations want to end collective bargaining so that they have a free hand to exploit and abuse their workers. The politicians, who are bankrolled by those same corporations, want to disrupt fundraising and support for progressive candidates and policies.

None of this is accidental. And the people who will get hurt the most are those who are following the conservative disinformation blindly with the pathetic impression that it makes them patriotic. They should ask themselves if they are really advancing the cause of freedom. They should ask Ronald Reagan.

6 thoughts on “Whose Side Are You On? Reagan Or Hitler?”