The prospects of Donald Trump getting the funding he craves for his idiotic vanity wall along the southern border are declining with each new day. Even he recognized in a whimpering tweet that the bipartisan congressional Conference Committee hashing out a compromise bill are leaning toward a skimpy sum that couldn’t be used for any actual wall building. 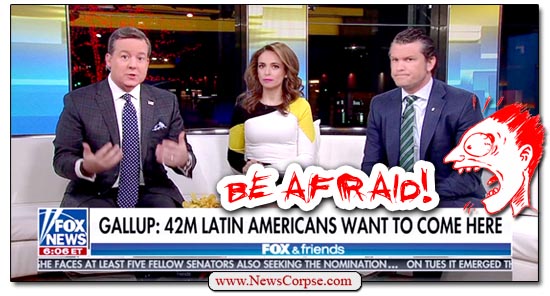 So naturally Trump is lashing out in the irrational and childish manner for which he is well known. His purpose, of course, isn’t to inspire a constructive dialogue, but to incite fear, hatred, and division. And he employs his usual bag of tricks to achieve those ends, mainly consisting of whining and lying. On Sunday morning he tweeted that:

Gallup Poll: “Open Borders will potentially attract 42 million Latin Americans.” This would be a disaster for the U.S. We need the Wall now!

It goes without saying that Trump’s assessment of the situation is entirely devoid of facts. What he describes as a looming disaster is actually just a set of hypotheticals that he has taken completely out of context. The Gallup poll he’s citing is much more nuanced than in his simplistic retelling. And, as usual, he didn’t provide a link to it for fear that people would be able to see the truth for themselves.

The poll asked a broadly hypothetical question of residents in Latin American countries about whether they would like to immigrate and, if so, what country would be their preferred destination. The survey results said that twenty-seven percent would like to immigrate, and that thirty-five percent of those would choose to go to the United States.

The only thing this tells us is that there is significant dissatisfaction with life in many of the Latin American countries. Who didn’t already know that? Much of the region is burdened with poverty, violence, and corrupt governments. Also, who is surprised that the U.S. would be a popular destination? Would Trump prefer it if our country was regarded as slime hole that no one wanted to move to? Although it does seem like that’s what he’s trying to turn it into.

Trump’s ignorance is further demonstrated by his omission of other relevant data on international migration. In another recent Gallup poll it was found that an even larger percentage of Europeans (41%) also say they would like to move to another country. Similarly, the top migrant destination worldwide is the U.S., with 158 million people – more than three times the number from Latin America alone – expressing an interest in moving here. For some reason, Trump didn’t bother to mention the potential invasion of America by Europeans. I guess that isn’t an issue for him and his white-wing Republican Nationalist Party.

It’s also notable that Trump didn’t come to rant about this after doing some deep research on his own or consulting his “experts” in the State Department. As usual, he was simply live-tweeting what he had just watched on Fox News. His favorite morning program, Fox and Friends, did a segment wherein the “Curvy Couch” potatoes featured this distorted take on the Gallup poll. And shortly thereafter Trump’s tweet appeared.

This is more proof that Fox News constitutes the “brain trust” of his administration. And, as a result, the nation is mired in the ignorance and bigotry that fills Fox’s programming 24/7. It’s a dangerous recipe that combines the ultra-rightist media with government power to poison the minds of the Deplorables who are most vulnerable to such lies and propaganda. And this Cult of Trump, with its State TV Ministry of Information, will continue to do harm until Trump and company are migrated to where they belong: Federal prison.

2 thoughts on “Trump Freaks Out Over Fake Fox News Report that 42 Million Latin Americans are Invading the U.S.”