There is much that Donald Trump and Supreme Court Justice Clarence have in common. For instance, their starkly conservative principles (although Thomas actually believes them, while Trump holds them as long as it’s convenient to do so). And they are also notorious abusers of women who have managed to escape the consequences of their repulsive behavior. 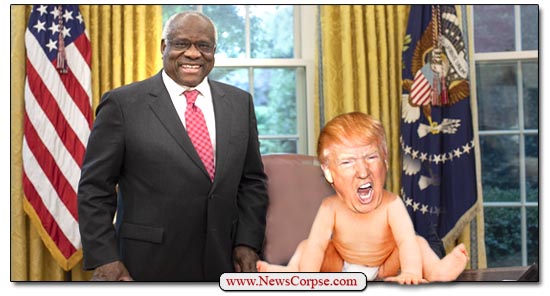 And now Thomas has written a new opinion that will surely please Trump. In a case involving another sexual predator, Bill Cosby, Thomas called for a total rewrite of a fifty year old precedent that shielded journalists from hostile lawsuits that would impose on their First Amendment guarantee of freedom of the press. The case is known as “New York Times v. Sullivan,” and it prohibited the recovery of damages for defamation unless it could be shown that the alleged offense was made “with knowledge that it was false or with reckless disregard of whether it was false or not.” As reported by ThinkProgress:

“Truth traditionally was not a defense to libel prosecutions,” the justice writes. “The crime was intended to punish provocations to a breach of the peace, not the falsity of the statement.” Thus, a journalist (or anyone else with a platform, for that matter) could face criminal prosecutions even if their reporting is 100 percent accurate.

Imagine that. A reporter could be held criminally liable for publishing a true story if the truth caused the subject harm. This is something that Trump would absolutely love. He is fond of slandering the media as “fake News” whenever they write accurate stories about what he actually does and says. If the law were rewritten in the manner that Thomas advocates, Trump could then sue the media enterprise that published it.

Trump has literally called for such a change in the law. At his cult rallies he has insisted that he should be able to sue the media when they publish stories that he regards as negative. And in one of his staged photo-op cabinet meetings, Trump said that:

“We are going to take a strong look at our country’s libel laws so that when somebody says something that is false and defamatory about someone, that person will have meaningful recourse in our courts. If somebody says something that is totally false, and knowingly false, that the person that has been abused, defamed, libeled, will have meaningful recourse.

“Our current libel laws are a sham and a disgrace and do not represent American values or American fairness. So we’re gonna take a strong look at that. We want fairness. You can’t say things that are false, knowingly false, and be able to smile as money pours into your bank account.”

First of all, the law already provides for recourse if someone is “knowingly” and “falsely” maligned. What Trump wants is to be able to sue anyone who criticizes him, even if the criticism is warranted and documented. Ironically, what Trump is calling for would put him in far more legal jeopardy than the journalists he is hoping to punish for being honest. Most reporters make conscious efforts to get their stories right. But Trump cavalierly lies whenever he gets the urge to attack his perceived foes.

This opinion by Thomas could not be more obedient to the whims of the President if were dictated by him. And for all we know it might have been. Trump’s goal has long been to incite hostility toward the press and to diminish its reputation. That’s how Trump seeks to soften the blow from all the deservedly negative press he generates.

He isn’t interested in truth. He’s seeking the sort of tyrannical control of the press that all dictators lust after. It’s precisely the same sort of intimidation that he aimed at Saturday Night Live recently when he called for “retribution” against them for a satirical bit featuring Alec Baldwin. If Trump had his way he would revoke the First Amendment. And if Thomas has his way, it will be a big step toward that nightmarish end.