The hypnotic effects of cult worship have never been so clearly displayed as with Republican Senator Lindsey Graham. In short order he went from a virulent opponent of Donald Trump to his most devoted sycophant in Congress. Graham’s metamorphosis would make a superb to sequel to Kafka’s novel about a man who turns into a cockroach. 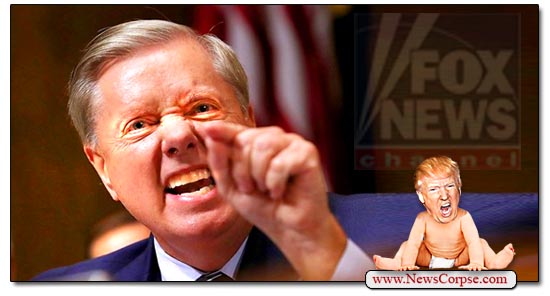 Let there be no ambiguity with regard to the transformation that Graham had to undergo. He literally described Trump as a “kook” who is “crazy” and “unfit for office.” But after chugging what must have been gallons of Kool-Aid, Graham reversed himself with those very same words in the opposite context:

Lindsey Graham today: I’m concerned by the media’s attempt to label Trump as a kook or not fit to be President.

Now Graham is the newly installed chairman of the Senate Judiciary Committee with a brand new compulsion to protect Trump from any and all criticism, while slandering those he perceives as the President’s foes. That puts former FBI Acting Director Andrew McCabe in Graham’s crosshairs. McCabe just published a book on “The Threat: How the FBI Protects America in the Age of Terror and Trump.” He goes into some detail regarding the evidence that Trump and his associates had suspicious connections to Russia and various Kremlin operatives. In a 60 Minutes interview on Sunday McCabe summarized some of his concerns saying:

“If the president committed obstruction of justice, fired the director of the FBI to negatively impact or to shut down our investigation of Russia’s malign activity and possibly in support of his campaign, as a counterintelligence investigator, you have to ask yourself, ‘Why would a president of the United States do that? […]

“So all those same sorts of facts cause us to wonder if there is an inappropriate relationship, a connection between this president and our most fearsome enemy, the government of Russia?”

Based on the growing evidence against Trump, it would have been dereliction of duty had McCabe and his FBI colleagues not looked into the matter. Republicans persecuted Hillary Clinton with far less cause over everything from Benghazi to her emails. In fact, Graham was one of the fiercest proponents of those congressional probes. But now he has abandoned that ferocity in order to make himself a human shield for Trump.

To that end Graham announced that he would hold hearings to ascertain whether there was improper bias on the part of McCabe or others in the FBI and the Justice Department. That would be a risky proposition for him because it would result in many of the treasonous charges against Trump being aired publicly. McCabe, Rosenstein, and the Democrats on the Committee would be able to fill in the gaps that Graham would like to leave out. He wouldn’t be able to get away with the sort of biased pronouncements he unleashes in the media. For instance, in a Sunday interview on Face the Nation, Graham proclaimed that:

“It’s stunning to me that one of the chief law enforcement officers of the land, the acting head of the FBI, would go on national television and say, ‘Oh by the way, I remember a conversation with the deputy attorney general about trying to find if we could replace the president under the 25th Amendment. We’re a democracy. People who enforce the law can’t take it into their own hands. Was this an attempted bureaucratic coup? I don’t know.”

Actually, McCabe never had a conversation about the FBI trying to replace Trump. There was a conversation about whether there was support within Trump’s own cabinet to invoke the 25th Amendment of the Constitution, which would declare the President unfit to serve. That’s something Graham already weighed in on before “the change.”. And it is entirely within the purview of law to consider such actions. In fact, it’s absurd to characterize it as a “coup” because it would require the affirmation of Trump’s closest allies. Plus it would give him an opportunity to refute the allegations. And then the Congress would need to confirm any action with a super-majority. It’s called “Constitutional Democracy.”

It’s logic like that that permeates the Trump cultists like Graham. You simply cannot make any sense of it, nor is it productive to argue with them. They’ll just get that glazed look in their eyes, call you communist, and blame Obama for whatever it is you were arguing about. It’s one thing to have to suffer through interactions with these Deplorables online. But it’s another thing entirely to have them as sitting U.S. senators. Hopefully that will change next year.