On April 1, 2019, the White House released an official statement regarding a new Executive Order signed by President Donald Trump. The Order officially prohibits the observance of April Fools Day for the remainder of the term that Trump is in office. It is the forty-sixth Executive Order by Trump who once criticized President Obama for issuing Executive Orders. 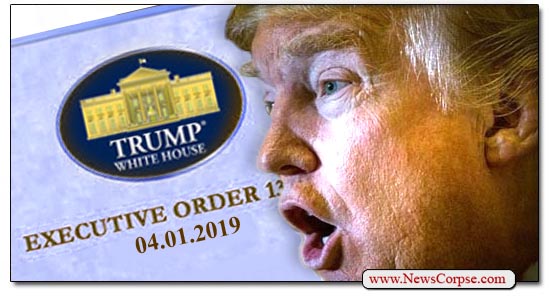 This Order is designed to forestall the “observance, celebration, recognition, ceremony, ritual, or tribute,” of any of the traditions associated with April Fools Day. The Order cites the “redundancy and profusion of mockable events and occurrences” that obviate the necessity for formal state acknowledgement of further “satirization, sarcasm, ridicule, farce, and/or parody.” Additionally, the Order enumerates examples of ludicrous and embarrassing behaviors that justify its issuance.

These are just a few of the instances when Trump has done or said something that were so painfully ludicrous that they could not be mocked, even by professional comedians. The full list goes on for more than forty pages and over 1,000 more such examples.

Consequently, the observance of April Fools Day in the era of Trump has been assigned to the White Office of the Department of Redundancy Department. The Department’s new director will be Fox News host (and Trump’s personal friend and advisor) Sean Hannity, who has a decades long record of established credentials for being thoroughly redundant, as well as irrelevant and expendable.

This Order will only be operative on the first of April of each year. For the rest of the year it will be permitted to lampoon the President and his laughably wacko deeds and utterances. In fact, it will be almost impossible to resist. But on the appointed days Trump will be temporarily relieved from having to endure the humiliation that he has earned and so richly deserves.