The New York Times published a disturbing article yesterday about how giant, multinational corporations are robbing the U.S. treasury (and people) by exploit tax loopholes and the political clout to obtain them. The marquee revelation in the article is that General Electric, who made $14 billion dollars worldwide last year ($5 billion domestically), paid ZERO dollars in taxes.

“Its extraordinary success is based on an aggressive strategy that mixes fierce lobbying for tax breaks and innovative accounting that enables it to concentrate its profits offshore. […]

Although the top corporate tax rate in the United States is 35 percent, one of the highest in the world, companies have been increasingly using a maze of shelters, tax credits and subsidies to pay far less. […]

Such strategies, as well as changes in tax laws that encouraged some businesses and professionals to file as individuals, have pushed down the corporate share of the nation’s tax receipts – from 30 percent of all federal revenue in the mid-1950s to 6.6 percent in 2009.”

This really doesn’t qualify as a press-stopping scoop. The trend toward corporate domination of our nation’s economy and politics has been evident for decades. Their success in wrangling beneficial treatment from Congress and the courts (i.e. Citizens United) through adept distribution of cash and favors has been decried in liberal circles repeatedly. But the effect of that criticism was itself suppressed by more corporate cash raining down on Tea Partiers, who have been exploited by AstroTurf inventions like Americans for Prosperity and FreedomWorks, to demonstrate against their own interests. Thanks, Koch brothers.

Nevertheless, it is good to see a mainstream media source shining a light on this repugnant unfairness orchestrated by wealthy special interests and their benefactors. However, there is a surreal quality to the reaction in the press to this article. Right-wing politicians and pundits are suddenly praising the Times for outing GE. Ordinarily they regard the Times as irremediably biased and unreadable, but if they are attacking another of the right’s favorite foes they are considered sufficiently rehabilitated and trustworthy.

The most surreal response to this is the one emanating from Fox News. They have glommed unto this story like a shark on virgin surfer. 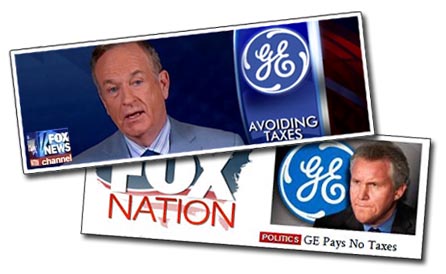 There were several reports on their daytime broadcasts. It was featured on their Fox Nation web site. And Bill O’Reilly devoted a segment to it complete with his trademark bluster and animosity toward his long-time nemesis GE and CEO Jeffrey Immelt, whom he has called “a despicable human being.”

O’Reilly: Last year General Electric made 14 billion in profit worldwide, including $5 billion in profit in the USA. Yet General Electric paid zero – nothing – in taxes to the feds. As you know GE boss Jeffrey Immelt – big supporter of President Obama, and vice versa. So the question is how could GE pay absolutely nothing to the government, and how could I get that deal?

Unsaid in all of this is that Fox News’ parent company, News Corp, did get that deal. As I reported earlier this week, there was another Times article a few years ago that revealed that…

“By taking advantage of a provision in the law that allows expanding companies like Mr. Murdoch’s to defer taxes to future years, the News Corporation paid no federal taxes in two of the last four years, and in the other two it paid only a fraction of what it otherwise would have owed. During that time, Securities and Exchange Commission records show, the News Corporation’s domestic pretax profits topped $9.4 billion.”

So the company that employs O’Reilly is banking almost twice the domestic profits of GE and paying nothing in taxes, yet they are the ones throwing tantrums and lobbing insults. This is the sort of behavior for which the word hypocrisy was coined.

I have no problem with Fox flogging GE over this issue, which is an important one that involves many more corporate scoundrels and deserves more attention. But it would have been nice if they could have at least acknowledged that they are engaging in the very same tax shenanigans as GE. However that would have required them to be an honest news provider, which is contrary to their mission.

[Update 3/28/11:] And finally there is some media attention on the fact that there are many U.S. corporations brazenly shortchanging the country. MSNBC via Daily Beast.

14 thoughts on “Fox News Freaks Out Over GE’s Taxes”