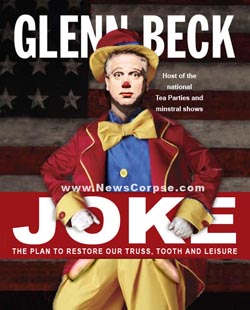 On his TV program yesterday, Glenn Beck launched into a hilarious routine that simply has to be shared with the world. It concerned his paranoid perception that an army of George Soros soldiers are advancing on him and his motley crew.

Beck: And please, enough, George Soros. He’s got 86 people now on staff at Media Matters. Eighty-six! And the CEO of Media Matters said, “Oh, we need to hire some more.” He was fundraising. “We need to hire some more because it takes a lot of people to correct Glenn Beck’s nonsense.” There are ten people. Ten that work on this program. Ten that put it together. TEN! It takes 86 to try to tear us down.

That’s hilarious. I could hardly…oh wait. He was serious. Beck actually thinks that every employee at Media Matters is assigned to watching and fact-checking his program. That includes the accountants and receptionists. And who does that leave to monitor Sean Hannity and Bill O’Reilly and Megyn Kelly and, well, everybody else at Fox? Not to mention Rush Limbaugh and Sarah Palin and Andrew Breitbart and everybody at every other television or radio station, or newspaper or Internet site.

Nope. Beck believes that all of Media Matters is wholly dedicated to bringing him, and only him, to ruin, and that George Soros is personally staked out in front of a wall of TVs directing the effort.

I don’t know how many people are actually monitoring Beck’s program, but I can safely assume that it takes at least a few focused researchers to run down the actual facts associated with his wild proclamations, because I do it myself with some frequency.

The advantage Beck has over those of us who rely on facts is that it takes considerable time and effort to confirm or negate information with documentary evidence of your conclusions. However, all it takes is a good imagination if you’re going to make stuff up.

For instance, it takes only a few seconds for me to claim that Beck once hired Monica Lewinsky as an intern on his old Morning Zoo radio show, and that the show’s producer admitted that they sent Lewinsky to Washington as a prank. It would take a legitimate researcher much longer to look into this assertion, acquire documents, compare dates, seek statements from witnesses, etc.

That’s why it only takes ten people to put together Beck’s show. They really don’t have much to do other than keeping the blackboard clean. And they aren’t distracted with pesky little concerns about honesty or proof. In fact, ten people seems a little high to produce the garbage that Beck puts on the air every day. I could probably do myself with an intern and a box of chalk.