The film version of Atlas Shrugged, Ayn Rand’s soporific paean to malevolent ego-centrism, has finally been released to the throngs of slobbering Tea Baggers desperate for some cinematic validation. Sadly for these pathetic flim(flam) buffs, this flick hardly fills the void in their lost souls. 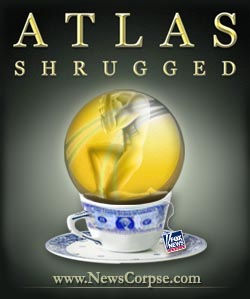 The movie is being released as “Part 1” with the promise of two more in the unlikely event that this one turns a profit. But the circumstances of its production foretell its dreary fate. Producer John Aglialoro has stated publicly that he was forced to commence production a few days short of the expiration of his rights to the book. As a result it was hurried into production without a script or a cast. He also admitted that casting was difficult because “Talent agencies were not sending us many of their top people.” Apparently no one of note wanted to be associated with a project that had been aborted on numerous occasions. That’s why one of the most popular books of the last half century is coming to the screen with unknown TV talent in the leads. The director complained that he didn’t have the necessary time to make the movie he wanted to make. It’s almost as if the principals are preemptively making excuses for why the movie sucks so bad. And they aren’t the the only ones who think so. The reviews have been merciless:

Roger Ebert: “The most anticlimactic non-event since Geraldo Rivera broke into Al Capone’s vault. I suspect only someone very familiar with Rand’s 1957 novel could understand the film at all, and I doubt they will be happy with it.”

Joe Morgenstern, Wall Street Journal: “The book was published in 1957, yet the clumsiness of this production makes it seem antediluvian.”

Bill Goodykoontz, Arizona Republic: “It has taken decades to bring Ayn Rand’s ‘Atlas Shrugged’ to the big screen. They should have waited longer.”

Kurt Loder, Reason Online: “The new, long-awaited film version of Atlas Shrugged is a mess, full of embalmed talk, enervated performances, impoverished effects, and cinematography that would barely pass muster in a TV show. Sitting through this picture is like watching early rehearsals of a stage play that’s clearly doomed.”

Peter Dubruge, Variety: “Part one of a trilogy that may never see completion, this hasty, low-budget adaptation would have Ayn Rand spinning in her grave.”

Some of the most damning criticism highlighted above comes from those who might otherwise be considered the film’s target audience, for instance the Wall Street Journal (Fox’s newsprint cousin) and Reason Magazine (the imprint of Randian Libertarianism).

From the start the film’s prospects were dim. It was an independent with little backing and decades of false starts. In order to preserve his rights, Aglialoro bankrolled the project with $10 million of his own money. Without a heavyweight distributor they had to be creative. So they hit up the Tea Party circuit for support.

A trailer for the film debuted at the Conservative Political Action Conference in February. It was screened for such cultural tastemakers as John Boehner, and Andrew Breitbart (yes, that was sarcasm). Then they brought in the big guns: FreedomWorks, the AstroTurf Tea Party organizers sponsored by the billionaire Koch brothers. Matt Kibbe, the president and CEO of FreedomWorks went to work promoting the film via his Freedom Connector social network (which has been prominently plugged by Glenn Beck), and a massive email list. It doesn’t appear to have worked.

The boxoffice for the opening weekend, timed to coincide with the federal tax filing deadline, was middling at best. The movie pulled in $1.7 million for three days from 300 screens. The take dropped nearly 50% from Friday to Sunday, which doesn’t bode well for increasing the number of screens in the weeks ahead (and the universally dreadful reviews won’t help either). The filmmakers are already touting the per-screen attendance numbers, but what they fail to acknowledge is that per-screen sales are generally higher for limited releases because more people are funneled into fewer venues.

[Update: Weekend #2 – Tea Baggers stayed away from Atlas Shrugged in droves. The movie earned half as much money as the previous weekend despite playing in 165 more theaters (+55%)]

The truth is that the Tea Party marketing has been less than spectacular (perhaps because the Tea Party doesn’t actually exist). If FreedomWorks has a couple of million people on their mailing list and all of the film’s viewers were FreedomWorkers (not likely), then 90% of their supporters ignored the call to action. The weak turnout by the Tea Party set mirrors their weakness at the annual Tax Day rallies where mere dozens bothered to show up.

The affinity for Ayn Rand by the Tea Party has always been a bit of a mystery. Sure, there is a shared hostility for government, particularly when it endeavors to fulfill its Constitutional obligation to provide for the general welfare. Both Rand and the TP’s despise efforts to aid society’s less fortunate, whom they believe deserve to suffer. But how do predominantly Christian, patriot, Tea Partyers justify their idolization of an anti-American, atheist who regards compassion as evil and selfishness as the pinnacle of human values?

Ironically, a key theme of the book and the film is the rejection of society by the wealthy business class who mysteriously disappear. There is a correlation to that plot point in contemporary America as we have already witnessed the disappearance of business luminaries like Bernie Madoff, Ken Lay, Jack Abramoff, Dennis Kozlowski, Bernard Ebbers, and John Rigas, to name a few. It doesn’t appear that society has suffered from their absence. Yet there is another industrial titan who not only hasn’t vanished, he is masquerading across the airwaves as a presidential candidate. I’m not sure Ayn Rand would approve of this, however, the popularity of Donald Trump at Tea Parties is perfectly understandable. He is the ultimate manifestation of Randian politics: a greedy, conceited, selfish bully. But for every Tea Party supporter there are probably twenty other Americans who wish that Trump would “go Galt.”

There is another curious irony in the marketing strategy for the film. Tea Partyers and other Rand fans were furiously emailing appeals to their friends and Facebook buddies to implore them to see the movie – not because they considered it great cinema, they hadn’t seen it yet – but because strong ticket sales would somehow validate the book’s principles. In Rand’s world money equals truth. They regard the quality of the film as secondary to the need for boxoffice success in order to advance their agenda and to prove the power of the Tea Party as a consumer/political force. In other words, these Utopian free marketeers were afraid to trust the free market to decide the film’s fate.

Alas for them, it will anyway. And in the end, all anyone will remember of this drivel is that, when moviegoers were presented with a poorly planned, shoddily executed load of dreck, the audience shrugged.

This is far more entertaining:

10 thoughts on “What If Atlas Shrugged And No One Was There To See It?”