The New York Times published a story this week that contained new and credible allegations of sexual assault by Supreme Court Justice Brett Kavanaugh. While the article buried the charges in the body of the story, the victim, Deborah Ramirez, provides a harrowing account of Kavanaugh’s behavior that is consistent with the experiences of Dr. Christine Blasey Ford and others. 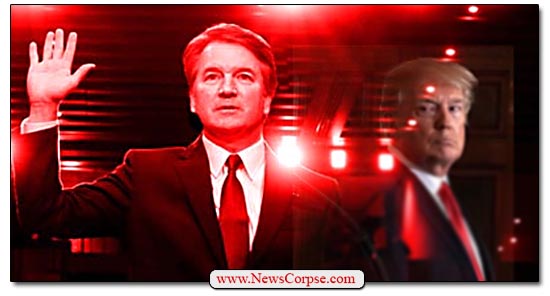 The renewed controversy over the Donald Trump nominated Justice has stirred the debate over Kavanaugh’s fitness to serve on the Court. There are already calls for investigations and even inquiries into whether Kavanaugh should be impeached. Among the justifications for his ouster from the bench is the now apparent fact that he lied to the Senate during his confirmation hearing. And he had no business being confirmed at all considering the fact that the FBI failed to investigate the charges against him, including those by Ramirez.

Enter Donald Trump. It comes as no surprise that Trump would rush to the defense of his nominee. Not just because he needs to validate his choice, but also because they share so much in common. Trump is also a serial sexual predator who has been accused by more than twenty women of harassment and/or assault. So naturally Trump lashed out on Twitter to protect Kavanaugh from the truths that are emerging.

Now the Radical Left Democrats and their Partner, the LameStream Media, are after Brett Kavanaugh again, talking loudly of their favorite word, impeachment. He is an innocent man who has been treated HORRIBLY. Such lies about him. They want to scare him into turning Liberal!

Brett Kavanaugh should start suing people for libel, or the Justice Department should come to his rescue. The lies being told about him are unbelievable. False Accusations without recrimination. When does it stop? They are trying to influence his opinions. Can’t let that happen!

Trump’s first inclination is always to blame everything on the media. It’s his way of telegraphing to his cult followers that, despite the facts and the evidence, what they are hearing is not to be believed. Trump’s assertion that Kavanaugh is “an innocent man who has been treated HORRIBLY,” has no basis in reality. And it’s absurd to suggest that he has been treated worse than his victims.

However, Trump goes completely off the ledge when he offers his advice that Kavanaugh should sue the press and his accusers for libel. Trump has often threatened to sue his own accusers, but always chickens out. During the 2016 campaign he swore that “All of these liars will be sued after the election is over.” Those lawsuits never came to pass. His lawyers surely told him that truth is a defense against libel, and the proceedings would subject him to discovery, wherein he would have to provide all relevant documents and evidence in his possession. There is no way he would do that.

Even worse, Trump said that “the Justice Department should come to [Kavanaugh’s] rescue.” This is further proof that Trump believes the Justice Department serves as his personal attorney, and can serve the same function for Kavanaugh. Clearly Trump has no idea how government works. But, unfortunately, he does have an Attorney General, William Barr, who doesn’t care how government works and is willing to violate the Constitution on behalf of a criminal president.

Trump’s glaring ignorance is apparent throughout these tweets. He obviously doesn’t know what “recrimination” means. Just retaliating against the women in these matters by calling them “liars” is recriminatory. And they have also been disparaged as drunks and sluts. Trump’s complaint that his critics are trying to “scare [Kavanaugh] into turning Liberal,” and to “influence his opinions,” makes no sense whatsoever. How would holding Kavanaugh accountable for his past behavior – and more recent lies – cause him to rule more favorably for the people causing him so much trouble? If anything, it would have the opposite effect.

Let’s be clear. The only reason Trump is even bothering to make a stink about this is that he’s afraid for his own fate. He even said as much in another tweet where he asked if it “sounds familiar” that Kavanaugh’s criticisms were based “on threats of Impeaching him over made up stories.”

Trump regards this as an attack against him. He doesn’t care about Kavanaugh or the Supreme Court, and certainly not the law. He sees this as criticism of his choice for the nomination and his own sex crimes. And anything that reflects negatively on him must be attacked with the full force of his viciousness and dishonesty. That’s how the diseased minds of malignant narcissists work. And Trump is, once again, providing a textbook example of this. Sadly, it’s also an example of why no one with these hostile and destructive psychoses should ever serve as president.