In the waning days of the 2016 presidential election, Donald Trump is becoming ever more desperate and visibly frustrated. On Saturday he emerged from his lair to deliver what was advertised as a major policy address. Promising to outline his goals for the first 100 days of his administration, Trump almost immediately drifted off into whining. The collection of grievances he enumerated are familiar to anyone who has seen his standard stump speech. 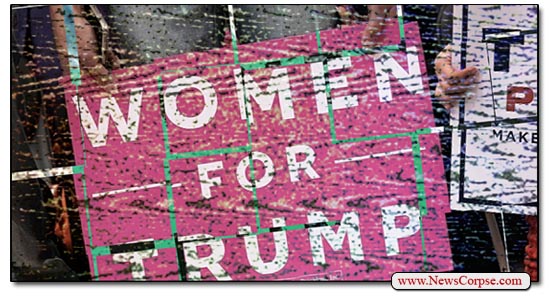 For the most part Trump complained about the system being “broken and rigged.” He repeated his misinterpretation of a Pew study that found 1.8 million dead people on voter rolls. What he fails to understand is that people die all the time and their names are not automatically removed when their hearts stop beating. Then he claimed that many of these dead people are voting, for which there is no evidence. But as he said, “These are numbers folks. These are numbers.” OMG! They’re NUMBERS!?! That proves … well it must prove something horrible.

Trump also said that “Hillary Clinton should have been precluded from running for the presidency. You have to wonder what authority he imagines would dictate who is permitted to run. In his cartoon brain there is an Office of Presidential Runability. And it would nix Clinton but give him a golden ticket to the White House. Then he rattled off his stale list of Clintonisms: she lies and deletes emails and conspires with the media to suppress him. But the most deranged segment of his rant concerned the ongoing sexual assault charges by a growing number of women. On that subject Trump said:

“Every woman lied when they came forward to hurt my campaign. Total fabrication. The events never happened. Never. All of these liars will be sued after the election is over. […]

“It was probably the DNC and Hillary’s campaign who put forward these liars with their fabricated stories. But we’ll find out about their involvement at a later date through litigation. And I look so forward to doing it.”

What this tells us is that Trump’s proposals for his first 100 days are irrelevant. He is going to be mired in lawsuits for months, or even years. There are currently eleven women pressing allegations against him. Each of these would have to be sued individually. So Trump would be required to file ten lawsuits, give ten depositions, and appear for testimony in ten trials. The duties of the presidency would have to be interrupted every time a court proceeding was scheduled. With ten cases like these that could mean hundreds of court ordered diversions from presidential activities.

These diversions would not be limited to the first 100 days. We are talking about more like 100 months, or the entirety of two terms in office. But this is what Trump regards as his priority if he were to become president.

His “Contract for the America Voter“ would be an afterthought, which would actually be for the best. His agenda consists mainly of tax cuts for corporations and the wealthy, exacerbating climate change, discriminating against Mexicans and Muslims, suppressing the rights of women, arming everyone over the age of five, leading the expansion of nuclear weapons to Japan, South Korea, and Saudi Arabia, and dismantling NATO. And with any spare time leftover Trump would advance the foreign policy interests of his pal Vladimir Putin. It’s also notable that nowhere in his 100 day agenda is there any mention of defeating ISIS.

This threat to sue his victims is just another demonstration that Trump is a vengeance-obsessed bully who doesn’t care about anything but himself. His litigious fetish also extends to the media, who he has threatened to sue several times during this campaign. Most recently he leveled a complaint against the New York Times for “irresponsible intent,” which doesn’t exist in tort law. By himself Trump would be an enormous burden to the court system. But he would be an even bigger burden to the nation. And anyone still considering voting for him is marking themselves as mentally and patriotically deficient.