Democrats are currently engaged in heated primary season with multiple candidates still jockeying for position. And the media attention on this is having a severe effect on Donald Trump. Narcissists don’t like it when they are not the center of attention. Consequently, Trump is ratcheting up his psychotic outbursts in order to seduce the press to stay focused on him. 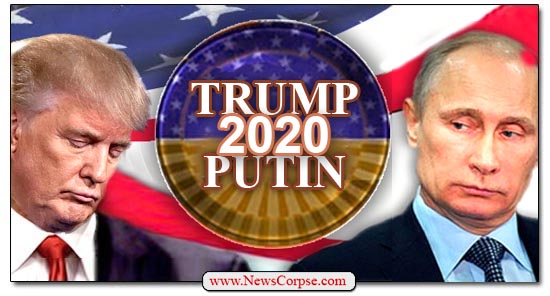 Trump’s latest plea for attention is a desperate and bizarre appeal for what he portrays as fairness for Bernie Sanders in the primaries. Of course, Trump couldn’t care less about how the Democratic primaries are conducted, other than to slather them with mud and lies. His phony concern for Sanders is actually a play straight from the Russian playbook and intended to sow discord and chaos. And running his defense is Fox News who are making ludicrous assertions that the media and Democrats are the “Agents of Russia.”

Recent reports revealed that American intelligence agencies have concluded that Russia is, once again, interfering with the presidential election. The reports detailed Russia’s efforts to tip the scales in favor of Trump and Sanders. Trump’s own Office of the Director of National Intelligence, led by Joe Maguire, sent a deputy to brief Congress about this a couple of weeks ago. This news made Trump irate. Not the news that Russia was attacking our democracy, but the news that Congress was told about it. So Trump fired Maguire and replaced him with Rick Grennel, a Trump toady who has no experience whatsoever in intelligence.

So with an impending national crisis involving a hostile foreign enemy attempting to subvert our election, Trump was confronted by a reporter who asked a simple, but significant question:

“Have you been briefed that Russia is trying to help Bernie Sanders and, if so, what’s your message to Putin?”

Pay close attention to that question, and then consider Trump’s reply (video below):

So Trump’s response to a question on what message he has for his pal Vladimir Putin, who is trying to foul our election is “They ought to investigate Adam Schiff.” Really? Trump had absolutely nothing to say to Putin. His only interest is in persecuting an elected member of Congress who is complying with his oath to protect and defend the Constitution. Putin, on the hand, is held harmless as he continues to attack this country. As long as Putin’s anti-American plots are designed to benefit Trump, Trump is content to allow them to proceed.

What’s more, Trump’s remarks are wholly unfounded and reckless. He has no evidence that Schiff leaked anything. It’s more likely that it was a Republican congressman (Devin Nunes?) who spilled to the press. And Trump doesn’t specify who he thinks should be investigating Schiff. Russia? Attorney Genuflect Bill Barr? Rudy Giuliani? Fox News? And if that’s not enough, Trump is also admitting his ignorance of Russian activity that everyone else already knows. Either his national security team is serving him poorly, or he’s lying (or both).

Trump followed up those remarks with a tweet that made things even worse:

Somebody please tell incompetent (thanks for my high poll numbers) & corrupt politician Adam “Shifty” Schiff to stop leaking Classified information or, even worse, made up information, to the Fake News Media. Someday he will be caught, & that will be a very unpleasant experience!

Once again, Trump is baselessly accusing Schiff of leaking classified information. However, Trump also suggests that the “information” that Schiff allegedly leaked was made up. In which case, it wouldn’t be classified. But worst of all, Trump overtly threatens Schiff with being “caught” and suffering “a very unpleasant experience!” All without a hint of evidence that Schiff did anything wrong.

This is part and parcel of Trump’s psychopathy that drives him to seek vengeance and to persecute his perceived enemies. It’s a frightening descent into fascistic totalitarianism. And with each passing day Trump is less and less worried about exposing those tendencies and acting on them. This is precisely the behavior that many warned Trump would engage in if Senate Republicans didn’t have the guts to expel him from office. And as it worsens, the blame needs to be evenly spread around from Trump to the GOP to Fox News and the rest of the Reich-wing media.

"The oughta investigate Adam Schiff" — Leaving the White House for India, Trump deflects from a question about Russian interference by calling for investigations of his political foes pic.twitter.com/NnJzrL4QHG