If you were paying attention to conservatives in the press today you would have received an advanced course their trademark obfuscation and flim flam.

Let’s begin with Newt Gingrich’s masterful recovery from an embarrassing fumble. After dissing fellow Republican Paul Ryan’s budget proposal as “radical, right-wing, social engineering,” Gingrich attempted to blame the media for quoting him correctly. When that fell flat he pivoted to a full mea culpa, apologizing publicly and personally to Ryan. But the piece de resistance was his declaration to Greta Van Susteren on Fox News that “any ad which quotes what I said on Sunday is a falsehood.”

Bravo. Gingrich has just invented the “if you quote me you’re lying” defense. It is so brilliant that even after he is ridiculed for it he can use it again to warn the media not to quote what he told Susteren either. This is a groundbreaking achievement in PR spin that even surpasses Jon Kyl’s infamous “not intended to be a factual statement.” 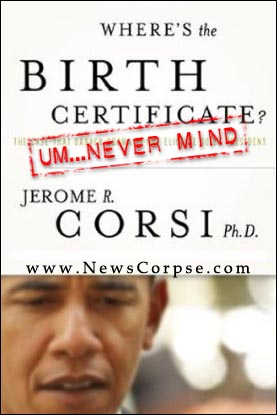 Now let’s move on to Jerome Corsi, author of a book with the world’s worst release timing: “Where’s the Birth Certificate? The Case that Barack Obama is Not Eligible to be President” This insightful work of political intrigue just happened to come out shortly after the titular certificate of birth (not that the question hadn’t been answered years ago anyway). But to make matters worse, Corsi was bumped from the Sean Hannity show reportedly because the “issue is no longer in the news cycle.” That’s right-wing talk for “we can’t sell this bullshit anymore.” Watch your head, Corsi, because when you’ve lost Hannity, the next stop in that barrel is the bottom.

Finally we have the queen of media whimpering, Sarah Palin. Despite having sworn off of criticizing the press weeks ago, her bashing continues unabated. In an interview with Sean Hannity (who apparently thinks that she is still in the news cycle) she attempts to defend Gingrich and advises her conservative comrades to steer clear of the “lame-stream media.”

“Candidates need to get their message out through the new social media. Don’t even participate in that goofy game that’s been played for too many years with the leftist lame-stream media.”

I couldn’t agree more. Republicans and other conservatives should sequester themselves in the realm of social media, talk radio, and Fox News. No more pandering to Meet the Press or the Washington Post. Just update your Facebook status with a policy paper on national security. Then Tweet your positions on the economy and health care. I’m sure any respectable Republican could do that in 140 characters or less given that they don’t have to worry about using facts or reason.

In order for this to work, however, the media has to reciprocate. For as long as Palin and other right-wingers confine themselves to conservative media and Internet platforms they control, the rest of the press must ignore them right back. That means no coverage of their Tweets or Facebook posts or interviews with Rush Limbaugh or Steve Doocy. Although exceptions may be granted for mocking the inevitable gaffes and malaprops they will generously provide.

If the right would actually follow through with this threat, and the “lame-streamers” could resist the temptation to hype every belch some celebrity politician emits, watching TV and reading newspapers could become a lot more enjoyable and educational.