Three weeks after the murder of George Floyd by police in Minneapolis, America’s streets are still teeming with outraged citizens who are no longer willing to tolerate such injustices. It’s an unprecedented and sustained demand for change that has been fueled by a string of atrocities and populated by a truly diverse cross-section of Americans. 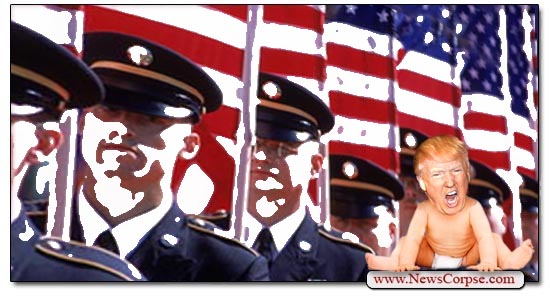 Conspicuously absent from this nationwide (worldwide) outpouring of grief and determination is the President of the United States, Donald Trump, whose only contribution has been to malign the protesters as “rioters,” “looters,” “thugs,” and even “terrorists.” Trump has repeatedly assaulted both the protesters and local governments with noxious threats of deploying the military against the American people. In Trump’s view these concerned citizens are enemies of the state simply because they oppose police brutality and are willing to act on their constitutional rights.

So for three weeks the people have clearly stated their intentions to compel meaningful change. And during that time, despite (or because of) his stubborn and bellicose opposition, Trump has seen his approval ratings decline into record low territory. The American people overwhelmingly support Black Lives Matter and the ongoing protests lobbying for reform.

Consequently, Trump has pivoted in an attempt to stop the hemorrhaging of his 2020 reelection campaign. He has apparently been convinced that he needs to grab onto this whirling tornado of dissent and score some undeserved points for himself. To that end he has hurriedly patched together a pitifully weak policing reform initiative that fails to address many of the core issues and solutions.

Trump’s latest exercise in hypocrisy comes in the form a unilateral move that Republicans regarded as an act of dictatorship when President Obama did it. His new executive order (EO) – the 162nd of his presidency – is an attempt to upstage congressional efforts to legitimately reform police practices by appropriating initiatives proposed by Democrats. However, this EO will be less comprehensive and will not have the force of law behind it. It can also be reversed or watered down by another executive order.

Additionally, Trump’s EO is a blatant contradiction of nearly everything he’s said about “law and order” since the Black Lives Matter demonstrations began. Virtually every public comment he’s made has condemned Americans who have taken to the streets to protest police brutality and unequal justice. He has never acknowledged the systemic racism that permeates many institutions, and this EO doesn’t do so either. But the fact that he felt it necessary to take this step is actually a validation of the demonstrations and proof that they were required to force forward movement on these issues.

Trump’s Rose Garden speech, before a nearly totally white audience, spent far more time praising the police than criticizing the injustice and violence that his EO was supposedly drafted to address. And of course, he politicized the event by applauding himself as the great emancipator. He also heralded imaginary achievements with the economy, the coronavirus, and other matters that have nothing to do with law enforcement reform. And only Trump could say that “We’re fighting for school choice, which really is the civil rights of all time in this country,” during a speech meant to ease concerns about racist cops. It was a painfully obvious screed of propaganda aimed at boosting his floundering reelection prospects and nothing more.

Simultaneously, Trump falsely asserted that President Obama and Joe Biden “never even tried” to do anything about systemic racism. In truth, every time Obama tried to advance those matters he was blocked by Republicans and accused of being racist himself. The Trump administration actually repealed Obama’s reforms by executive fiat, slashed funding for community policing, and refused to enforce consent decrees won in court by Obama’s Justice Department. Obama also impaneled a task force to study the problems plaguing policing in December of 2014. In March of 2015, they issued a detailed report with specific policy recommendations. At the time, Trump was tweeting about how Obama was anti-police:

Obama now wants to deny due process to the police. He’ll give all constitutional rights to the terrorists but not our cops.

That tweet was in response to Obama’s remarks criticizing the failure of grand juries to indict police officers for the killings of Michael Brown in Ferguson, Missouri, and Eric Garner in Staten Island, New York. Five years later Trump is still avoiding the real issues, and still doing nothing to prevent future tragedies because he only cares about how he can further his own personal and political interests. And anyone who fails to recognize that now is a fully indoctrinated disciple of the Cult of Trump and, sadly, beyond help.