When someone is suffering from severe mental infirmities, they are prone to making remarks that inadvertently expose the depths of their derangement. Donald Trump is a prime example of this. And he just provided another instance to add to the cornucopia of commentaries that serve to prove how socially distant he is from reality. 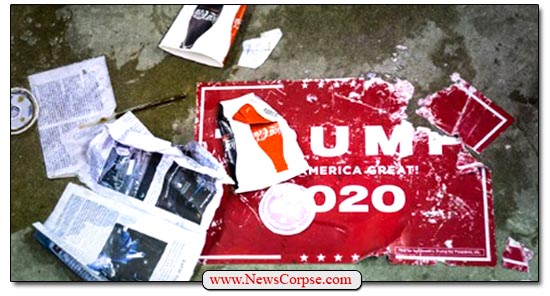 On Friday morning Trump addressed a gaggle of reporters in his ongoing effort to claw his way out of the political abyss he has dug for himself. Among the questions he replied to was one about mail-in voting. He began by falsely asserting that “mail-in ballots are a disaster,” and that the upcoming election will be “rigged.” He then went off on an extended tirade that was chock full of baseless allegations drawn mostly from his asinine imagination. The rant (video below) concluded with Trump claiming that…

“This is going to be the greatest election disaster in history.”

Don’t be confused. That is not a warning. It’s a promise. It’s what Trump and his Republican confederates intend to insure happens by whatever means necessary. He’s not issuing an alarm. He’s proclaiming with pride the core strategy of his 2020 reelection campaign. He should print it on his hats.

This isn’t a new tactic by the GOP. They have made the failure of government the primary theme of their party philosophy for decades. They fear monger about how terrible government is, and then, when they gain power, they set about to prove it by purposefully orchestrating the failure they predicted. Then they ask you to vote for them again.

Trump’s persistent condemnation of mail-in voting will continue to be a key component of his reelection effort. He knows that his prospects for victory are dismal, so he’s focusing on delegitimizing the election. He even went so far as to propose to delay the election, which he has no legal authority to do. Although, if the the election date were to change, most Americans would probably prefer to make it sooner, along with Inauguration Day.

In a bizarre twist of political theater, Trump’s press secretary, Kayleigh McEnany, was asked about the news that Hong Kong would be delaying their elections. She responded without a hint of irony that…

“We condemn the Hong Kong government’s decision to postpone for one year its legislative counsel elections and to disqualify opposition candidates. This action undermines the democratic processes and freedoms that have underpinned Hong Kong’s prosperity.”

Exactly! So McEnany is affirming that Trump’s intentions are to “undermine the democratic processes and freedoms” of the United States. Not that any further affirmation was needed. It was apparent in Trump’s deployment of federal storm troopers to assault and suppress citizens exercising their constitutional rights to demonstrate. It’s apparent in his toleration of Russia placing bounties on American soldiers. It’s apparent in his favoritism of corporations and the wealthy in his economic and taxation agenda. And it’s tragically apparent in his fatally negligent mishandling of the coronavirus pandemic.

Remember that when you hear Trump say that “This is going to be the greatest election disaster in history.” He’s right, but not for the reason he thinks. Like everything else that Trump brags about, this will be “the greatest…in history.” That’s how you know that it’s something he’s taking pride in. And It’s why the American people cannot afford to be complacent about it. It will take the determined vigilance of every patriotic citizen to prevent Trump from achieving the disaster he intends to provoke.