Lawyers for Van Jones have taken a step that ought to have been taken long ago – by numerous people, for hundreds of offenses. Jones’ representatives have notified Fox News that that he will no longer tolerate the lies and defamation that they have engaged in for the past couple of years. They have sent Fox a cease and desist letter and they appear to mean business:

“For nearly two years, on programs broadcast on and by the Fox News Network, a series of sensational and inflammatory charges have been made against Mr. Jones. Each of these statements is demonstrably, unequivocally, and absolutely false, and each is clearly defamatory as set forth below.”

The letter then proceeds to enumerate some of the instances wherein Fox maligned Jones by falsely asserting that he is a communist, a Marxist, etc. Additionally, Jones was accused of being a revolutionary, a convicted felon, a 9/11 Truther, a cop killer, and a racist. Just this morning, in a response to Jones’ challenge to debate, Glenn Beck portrayed Jones as anti-American and an advocate of “The violent overthrow for a Marxist government.”

All of these charges are false and injurious, and the letter gives Fox until June 24, to indicate their intention to “cease and desist from further dissemination” and to broadcast a retraction. Despite the documentary evidence to support an action against Fox, I do not expect them to comply. That’s not their style. They will dodge and weave and resort to histrionic counterattacks.

In February of 2010, Jones assumed a forgiving stance, telling Beck that “I love you brother.” I wrote at the time that I didn’t approve because all Beck would do is continue to harass and lie about him. Now Jones knows what I knew then. He told Ed Schultz today that he has tried to be a “turn the other cheek” kind of guy, but that he only has four cheeks and he’s running out. He noted that Beck has continued to stalk him even two years after he left the White House, and that he’s had enough. 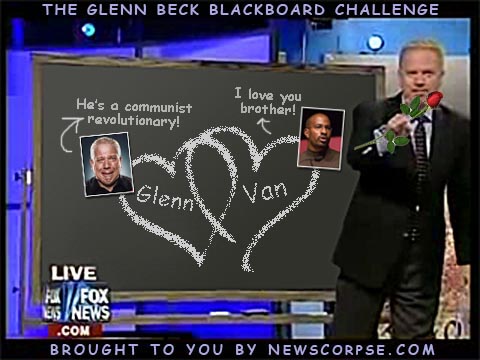 It took you long enough, Van. In the meantime, Jones can use this legal maneuver, and his debate challenge, to draw attention to his new American Dream Movement, details of which will be released at an event in New York on Thursday, June 23. So stay tuned. And hopefully this will inspire others who have been disparaged by Fox to step up and seek legal remedies.

7 thoughts on “Van Jones To Fox News: Cease And Desist!”