In January, the United States House of Representatives impeached Donald Trump – again. It is only the fourth time a president has ever been impeached, and the first time that a president was impeached twice. Furthermore, with ten Republicans voting in favor of Trump’s impeachment, it was the most bipartisan impeachment in history. 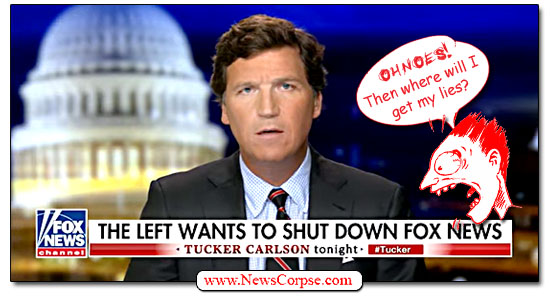 Nevertheless, Fox News continues to distort reality with utterly ridiculous versions of Trump’s tribulations. And not surprisingly, Tucker Carlson is leading the way with flagrant lies and wholly manufactured inventions of what others are feeling. The Thursday night episode of his Fox News melodrama (video below) asked belligerently “Why are the Democrats so angry.” It’s a burning question in the minds of people who live in the same fantasy universe as Carlson. He ranted…

“Why are the Democrats so angry? We’ve asked that question a number of times. It doesn’t seem to make any sense. Truly. In November the Democratic Party won everything Full control of the federal government. They seethed for years while they were out of power. […]They are crazy person mad. Florid-faced, irrational, yelling and making threats. It is bizarre.

You really have to wonder which Democrats he’s referring to. If he’s been watching the Senate impeachment hearings he would have seen the House Democratic impeachment managers calmly delivering an effective and devastating case against Trump, based on facts and testimony that included Trump’s own words. There wasn’t a single incident of yelling or threats or anything approaching such alleged histrionics. Talk about bizarre. Carlson may just be projecting what he sees within himself. Carlson went on to malign Democrats for even bothering to impeach Trump:

“You would think they’d get to work fixing the country they inherited. They promised to do that. Instead, they set about breaking things and hurting people. What is going on here?”

First of all, it’s unusually candid of Carlson to concede that Joe Biden inherited a country that was desperately in need of repair. But his assertion that Democrats are “breaking things and hurting people” is curious, to put it mildly. Does anyone knw WTF he is talking about? Carlson also revealed that he is either in a coma, or resorting to his standard mode of communication, shameless lying.

Democrats have been working vigorously to fix the problems caused by Trump and the GOP. They have drafted a COVID relief bill (that Republicans are blocking). They are restoring Obamacare to the state prior to Trump’s sabotage of it. They have rejoined the Paris Climate Accords and World Health Organization. They have ramped up coronavirus testing and vaccinations.

And that’s not all. They are addressing income inequality with plans to raise the minimum wage to $15.00 an hour. And Biden has addressed critical issues with Russia (cyber-espionage, election interference, bounties on American soldiers, Navalny poisoning) and China (virus origination, trade, Hong Kong independence, territorial waters) that Trump ignored and/or made worse. And Biden has only been President for three weeks. What more does Carlson want?

The tirade continued with Carlson complaining that Democrats were involved with Google’s YouTube taking down a pro-life account. Carlson accused Google of doing that because “Google supports abortion, like a lot of big corporations do. Children distract the labor force. If you’re raising your family, you are not serving shareholders.” Does that idiocy even need to be rebutted? For the record, Carlson is lying again. The real reason the account was closed was because it was “repeatedly sharing videos that spread misinformation about COVID-19 and the vaccines against it.” That is a violation of YouTube’s stated terms of service.

Carlson also complained that “Twitter shut down James O’Keefe’s Project Veritas Twitter feed. There was no justifiable reason to do this.” Once again, Carlson is lying. The reason Twitter shut down O’Keefe’s account was because of its “repeated violations of the platform’s policies prohibiting sharing — or threats of sharing — other people’s private information without consent.”

Carlson was especially perturbed over what he views as the victimhood of Fox News, saying that…

“Fox is the last big organization in the American news media that differs in even the smallest ways from the other big news organizations. The only one. That’s it. Just us. At this point, there’s everyone else in the media standing in crisp formation, in their starched matching uniforms and their little caps, patiently awaiting orders from the billionaire class.”

Umm… It seems like it’s Carlson and his tribe that is goose-stepping in formation, wearing little red caps, and taking orders from billionaire Rupert Murdoch. There is nothing similar in the rest of the media that reports to a single source of ultra-partisan dogma. In fact, there’s a great deal of competition and diversity. That’s the reason that Fox News stands alone. They have cornered the radical right news market. And they are the only network that so brazenly dispenses with journalistic ethics and the principles of honest reporting. So naturally they are “different” in the most biased and dangerous way.

11 thoughts on “Tucker Carlson of Fox News Wants to Know ‘Why Are the Democrats So Angry?’”