Fox Nation has posted another item that grossly misrepresents reality. Their featured story this morning concerns an interview that President Obama gave to CBS News. 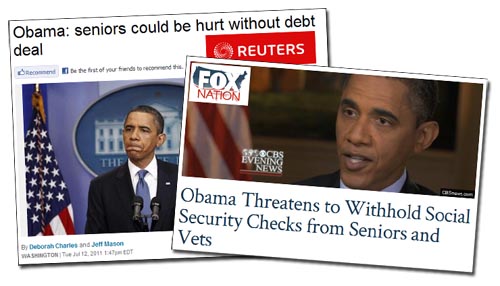 Notice the headline from the Reuters article to which the Fox Nationalists linked: Obama: Seniors could be hurt without debt deal. The article quotes Obama saying that…

“I cannot guarantee that those [Social Security] checks go out on August 3rd if we haven’t resolved this issue. Because there may simply not be the money in the coffers to do it.”

However, the Fox Nation headline is: Obama Threatens to Withhold Social Security Checks from Seniors and Vets. That, of course, is a lie. There is nothing in the article or Obama’s remarks that even implies that he would withhold any payments. He simply pointed out a potential consequence of the Republican’s intransigence and unwillingness to compromise.

There is a huge difference between an alert and a threat. If I were to tap you on the shoulder and warn you not to cross the street because of oncoming traffic, Fox would report it as me threatening to shove you off the curb into the path of a speeding truck. In the world of Fox News no distortion is too twisted if it casts Democrats in a bad light.

2 thoughts on “Fox Nation vs. Reality: On The Debt Ceiling”