On Tuesday evening Donald Trump made a return appearance on his former Ministry of Propaganda network, Fox News. He was treated to a twenty minute, primetime tongue-bath by Fox’s Senior Trump-Fluffer, Maria Bartiromo, for whom no sycophancy is too extreme. 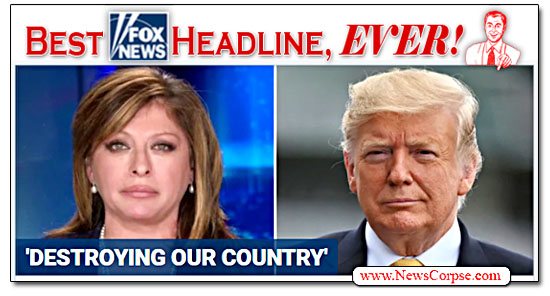 Naturally, Trump spent most of the segment consumed with unwarranted bragging about everything from creating the COVID-19 vaccine to the stock market to taxes. But Trump and Bartiromo devoted a significant portion of their lovefest to maligning President Joe Biden and immigrants. In fact, immigration has become the dominant issue on Fox News (not counting Dr. Seuss) since their failure to ignite an insurrection over Trump’s Big Lie about the election being “stolen.”

Trump pontificated tediously on this with flagrant lies that immigrants are “coming in by the hundreds of thousands,” and that Biden is “destroying our country.”

There is absolutely zero evidence of any migrants “coming in from the Middle East.” And the numbers aren’t anywhere near “hundreds of thousands.” But reality has never been an impediment to Trump’s lies before, so why stop now? Biden has only been in office for two months and his immigration agenda has yet to be implemented. So the current policy is still largely that which was put in place by the Trump administration. To the extent that there is a border “crisis,” it’s the result of migrants recognizing the difference between Trump’s lawless cruelty and Biden’s far more humane and compassionate approach that complies with U.S. and international law.

Despite the abundance of preposterous declarations by Trump and equally ludicrous affirmations by Fox News, it is still startling to hear them assert that Biden is destroying the country. Especially since that assertion comes after Trump incited an actual insurrection by violent thugs who invaded the Capitol. And after Trump rejected the election results confirmed by all fifty states. And after Trump maligned the Supreme Court for not capitulating to his demands to upend the Constitution.

Add to those atrocities Trump’s presiding over the deaths of more than half a million Americans from a pandemic that was exacerbated by his negligence and incompetence. Yeah sure, Biden is the one destroying the country. We’re lucky we have a country left for Biden to restore after Trump got through with it. And by the way, here is Biden’s press secretary, Jen Psaki, articulating the Biden policy in response to a question from Fox News:

Fox News reporter asks WH Press Sec. Jen Psaki whether the administration will put a “cap” on unaccompanied minors allowed into the U.S.

Psaki responds: “So should we send some kids who are 10 back at a certain point? Is that what you’re asking me?” pic.twitter.com/1uFYiOQiZn

2 thoughts on “Fox News and the Instigator of the Trump Insurrection Say Biden is ‘Destroying Our Country’?”