Once again it has become necessary to set the record straight as to which American political party supports civil rights and which party is devoted to racial prejudice and oppression. It shouldn’t be that difficult to make the distinction considering that every prominent hate group in America is composed of people who are steadfastly Republican. 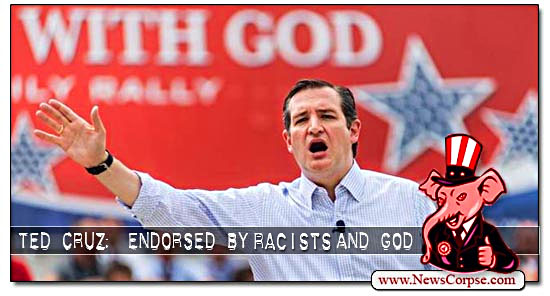 Texas Senator Ted Cruz is now helping to make the case that the Republican Party is the home of American bigotry. Upon learning that his Democratic Senate colleagues had scheduled a hearing to explore the rash of racist “Jim Crow” laws aimed at suppressing the vote of people of color in Texas, Georgia, and other red states, Cruz rushed out this tweet:

Impressive candor for Senate Dems to hold a hearing on the history of Jim Crow laws.

The problem with Cruz’s tweet is that he is clinging to a historical fallacy that bigots are fond of disseminating. He is pretending there was never a “realignment” of parties in the late 19th and early 20th centuries that saw Democrats embrace civil rights and Republicans embrace the Ku Klux Klan:

“The political realignment of black voters that began at the close of Reconstruction gradually accelerated in the early 20th century, pushed by demographic shifts such as the Great Migration and by black discontent with the increasingly conservative racial policies of the Republican Party in the South.”

The passage of the Civil Rights Act of 1964, and the Voting Rights Act of 1965, with the vigorous support of Democratic President Lyndon Johnson, was the nail in the coffin for Southern racists who then abandoned the Democrats and registered with the Republican Party, where they still reside. Three of the four notorious racists Cruz cites in his tweet became GOP heroes. The one exception was Robert Byrd, who renounced the Klan and became such a dedicated fighter for civil rights that he was honored by the NAACP:

“‘Senator Byrd reflects the transformative power of this nation,’ stated NAACP President and CEO Benjamin Todd Jealous. ‘Senator Byrd went from being an active member of the KKK to a being a stalwart supporter of the Civil Rights Act, the Voting Rights Act and many other pieces of seminal legislation that advanced the civil rights and liberties of our country.'”

So Ted Cruz is not only demonstrating his pitiful ignorance of the history of his own party, he’s lashing out at Democrats who are seeking to advance equality and shine a light on those who are trying to clamp down on the Constitutional liberties of all Americans.

This is typical of a Republican bigot like Cruz, whose only concern is retaining power for himself and his kind. It’s made all the worse by how openly and shamelessly he engages in this campaign of oppression. And it’s all a byproduct of the Trump era’s efforts to mainstream racism and empower the hate mongers who comprise the Cult of Trump.