President Biden is really confounding the Trump-deprived Republican Party. They have been struggling for weeks to find any line of criticism that is plausible, or even remotely believable. Their efforts have led to ludicrous contrivances roping in innocent victims like Dr. Seuss and Mr. Potato Head. But Biden’s approval has actually increased since he beat Donald Trump last November, and is double-digits higher than Trump’s was at the same point. 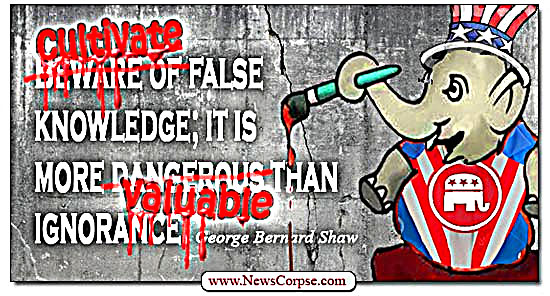 The GOP has taken a stridently anti-Biden path with knee-jerk opposition to his most ambitious initiatives. Not a single Republican in Congress voted for the COVID relief and stimulus bill that garnered majority support by the American people, including Republicans. They are similarly rejecting Biden’s infrastructure and jobs bill that has equal support across the political spectrum.

As a result, Republican backbenchers are throwing whatever mud they find handy at the wall and hoping something sticks. So far, they have come up empty, unless you count the humiliation they’ve accumulated. Take, for instance, Colorado QAnon congresswoman Lauren Boebert (please). On Sunday she tweeted this…

Imagine owning a business where the employees come in one day and destroy everything you've worked so hard to achieve.

Fortunately, we don’t have to imagine that. Biden has come into office and set a course toward undoing much of the damage that Trump and his thug brigades worked so hard to achieve. Biden told voters he would do just that during his campaign, and he’s keeping his promise. What Boebert doesn’t get is that this is not some new staff at a business coming in and changing everything. It is a new administration in the White House that the American people put there to do precisely what they’re doing.

However, that isn’t the only thing that Boebert is too ignorant to comprehend. Later the same day she tweeted this…

After the past year of lockdowns, small business closures and job losses the LAST thing Biden and company should be doing is increasing taxes.

In fact, we should have a tax holiday for some relief after this past year of COVID!

Boebert thinks that America’s millionaires and billionaires deserve a tax holiday? Never mind that they already “profited handsomely” during the pandemic. As reported by USA Today, while “The COVID-19 pandemic has triggered an economic crisis of a magnitude not seen since the Great Depression [and] more than half a year later, more than 11 million Americans remain unemployed […] America’s 614 billionaires grew their net worth by a collective $931 billion.”

So naturally Republicans like Boebert want to throw more money at their wealthy benefactors. Biden, on the other hand, is focused on rest of the population that has just received another stimulus check that every Republican voted against. And Biden thinks that it’s time for the rich to pay their fair share, so he’s proposing increases on taxes, but only for those earning more than $400,000.

What’s more, Boebert’s disingenuous sympathy for the small business that were locked down, and the job losses she mentioned, doesn’t acknowledge that all of that economic pain was exacerbated by Trump and her party’s negligent and incompetent mishandling of the pandemic. After that, it’s rather callous of her to use the suffering of the American people as a cudgel against Biden who is actually doing something to help them.

Finally, Boebert also posted a hysterical complaint regarding Biden’s attention to the climate crisis. She tweeted…

Joe Biden’s climate plan includes cutting 90% of red meat from our diets by 2030. They want to limit us to about four pounds a year. Why doesn’t Joe stay out of my kitchen?

That tweet was in response to reporting by Fox News that consisted of their customary lies and distractions (and was even retweeted by the governor of Texas):

Not gonna happen in Texas! pic.twitter.com/zqYS9kH8CU

The only thing you need to know about this is that none of it is true. While it would be beneficial to both the health of the planet and its human occupants to reduce their intake of red meat, the charge that Biden made a proposal to force its elimination is flagrantly untrue. See this thread (and this article) for more details:

This stuff is completely imaginary. Biden has not proposed any limit on Americans’ meat consumption.

What happened: 1) The Daily Mail ran an article that dishonestly connected Biden’s climate plan with a not-at-all-about-Biden study. 2) Others on the right just ran with this. pic.twitter.com/VRB52TPmUj

This is the sort of desperation that Republicans are resorting to attack Biden and other Democrats. They haven’t got anything substantive to talk about, so they invent “scandals” and distribute them to their dimwitted cult followers. But true to form, they don’t even do that very well.

UPDATE: Fox News issued a correction for their hamburger story.

Fox gently acknowledges that its coverage about Biden supposedly trying to force Americans to eat less red meat wasn't accurate: "A graphic and a script incorrectly implied that it was part of Biden's plan for dealing with climate change. That is not the case." pic.twitter.com/iClZSk8P4M