Republicans in congress have been holding the American people hostage for weeks now. Despite the fact that nearly every credible analyst – economists, politicians, academics, etc. – agree that a default by the United States would bring about an economic calamity, the GOP is still threatening to submit the nation to that fate if Democrats do not capitulate to the Tea Party platform of austerity for average Americans and opulent prosperity for the richest one percent.

Make no mistake, the Republicans know exactly what their threat entails. They know that default would be catastrophic. We know because they’ve said so. And we know because we have their voting record to prove it. Between the years 2002 and 2008 Republicans voted repeatedly to raise the debt ceiling while George W. Bush was in the White House. So what changed? 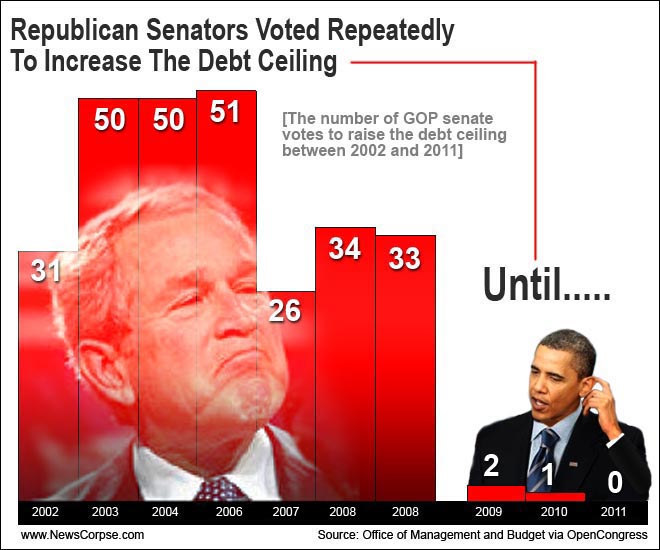 The Republican’s are playing “Chicken” with our economy. They don’t care about the deficit. They don’t care about taxes. They certainly don’t care about the elderly or the poor or you or me. They only care about their wealthy benefactors, the billionaires and corporations who bankroll their campaigns. And, of course, their obsession with defeating President Obama next year. They know that a bad economy makes things more difficult for incumbents to get reelected, so they are endeavoring to produce such an outcome to achieve their political goals – at the expense of everyone else and multiple future generations.

Thanks GOP. And thanks Corporate Media for failing to report this in context.

8 thoughts on “GOP Senators Loved Raising The Debt Ceiling Until…”