The nation is currently in the midst of a fourth wave of the COVID pandemic. And sadly, this one was entirely preventable. It was caused by the ignorant and stubborn resistance of anti-vaccine deadenders who have bought into the reckless lies of Fox News and the sociopathy of Donald Trump and his Republican Party. 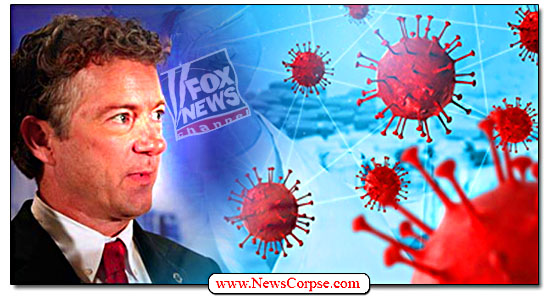 Among the most obsessed anti-vaxxers is Kentucky senator Rand Paul (R-COVID-19). He has been a staunch opponent of the CDC and other health experts, including America’s foremost epidemiologist, Dr. Anthony Fauci. Paul is so far out on the fringe that he actually made a criminal referral of Dr. Fauci to the Justice Department for allegedly lying to Congress. Dr. Fauci’s response was that “You do not know what you’re talking about…If anybody is lying here, senator, it is you.”

On Monday morning, Paul posted a video to Twitter (see below) that stated his case in support of the much maligned coronavirus. And to be certain that it was consumed by as many dimwits as possible, it was also posted as an op-ed on the Fox News website. Paul reiterated his position that the virus is nothing to be concerned about and presented himself as the guardian of pro-COVID “freedom.” The terminally deranged commentary began with Paul courageously declaring that…

Never mind that no one was threatening to have him arrested, or keep his kids home from school, or close any government buildings. So Paul is boldly standing up against “threats” that nobody has made. He went on to tell House Speaker Nancy Pelosi that…

“You will not arrest or stop me or anyone on my staff from doing our jobs. […] so you can continue your drunk with power rein over the Capitol.”

Again, Pelosi has never suggested any such thing. And the rules in the House of Representatives were implemented at the direction of the House’s Office of Attending Physician. Paul’s complaints, however, were pulled straight from his asinine failure to understand public health matters. Which is what must have triggered his idiotic edict that “No one should follow the CDC’s anti-science mask mandates.” And even worse, Paul completely contradicted reality by saying that “Children are not at any more risk from COVID than they are for the seasonal flu.” To the contrary, recent data shows that children are being infected and hospitalized in greater numbers than at any time prior during this pandemic.

Likewise, Paul’s petty retaliation for anyone who disagrees with him will be to petulantly block every bill that comes before the Senate. And he’s doing all of this for an unnamed horde of vaccine-averse rebels who don’t care at all about exacerbating the pandemic and potentially aiding in its continuing mutation until a variant that is vaccine resistant emerges. Throughout the video Paul refers to some vague collective of “WE” who he claims to represent, but who are never defined:

In other words, “we” will expose ourselves, our families, our neighbors, our work associates, and every stranger with whom we come into contact, to a deadly virus that could be stopped with a simple shot in the arm. “We” will not be moved from our pigheaded stupidity just to save the lives of other innocent people who made smarter choices. And “we” will follow blindly the pundits and politicians who know nothing about epidemiology, rather than the doctors and experts who spent their lives studying it.

This isn’t about freedom. It certainly isn’t the freedom to go about our business without the fear of coming into contact with disease-carrying fools like Rand Paul. This is the kind of cognitively twisted thinking that has resulted in more than 600,000 COVID deaths in the U.S. so far. And if Paul and his confederate have their way, there will more suffering to come.

Rand Paul today: “It’s time for us to resist. They can’t arrest all of us .. No one should follow the CDC.” He then says he will introduce amendments to defund any govt agency that seeks to enforce CDC guidelines, including schools. pic.twitter.com/PYOQtKDYBN

3 thoughts on “Rand Paul Goes We, We, We, All the Way Hoping that COVID Kills More Americans”