A startling event occurred on Sunday that may be unique in modern times. Donald Trump’s spokes-shill, Liz Harrington, posted a tweet that exposed a bona fide case of media censorship. But this assault on free speech was not the work of the usual suspects among the “fake news” purveyors. It wasn’t CNN or the New York Times that clipped Trump’s officious oratory. 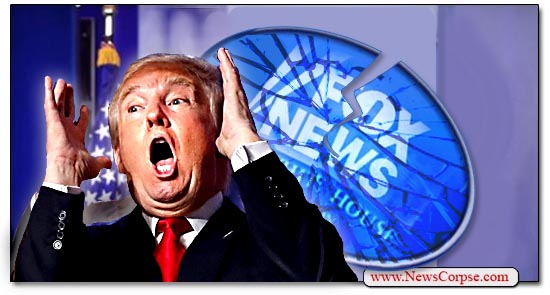 Nope. Harrington caught the thought police at Fox News in the act of making unauthorized edits to Trump’s divine discourse during an interview with Fox News host Dan Bongino. Most of this segment was filled with the typical Trumpian adoration by the Fox host and hysterical incoherence by Trump. But Harrington noticed something terribly wrong when she went to post Trump’s sermon on Twitter (which is a flagrant violation of their terms of service. Feel free to report it). She tweeted her discovery saying…

“WOW. So I went to post a clip from President Trump’s great interview on @dbongino last night, and lo and behold, Fox News EDITED and CHANGED what President Trump said, censoring out 45 accurately describing the Fake Election.”

First of all, it’s “former” President Trump. Secondly, it was more of a love-fest than an interview. Thirdly, what was edited out was not accurate. That said, she was quite right that some editing took place. What was excised was Trump lying again about the 2020 presidential election being “stolen” from him. He said that…

“You have a Fake Election, you have an election with voter abuse and with voter fraud like nobody has ever seen before and based on that and based on what happened they are destroying our Country.”

And here is what Fox News posted to YouTube: pic.twitter.com/P7B6Otbv4S

So the question is why would Fox News cut out this 14 second portion of a 16 minute interview? It could hardly be due to time constraints.

There are, however, a couple of plausible reasons to expunge this particular commentary. Fox News is already the subject of two multibillion dollar lawsuits (one by Dominion Voting Systems, and another by Smartmatic) for defamation as result of the network’s dishonest assertions, on Trump’s behalf, that that the election was “rigged.”

So Fox News has a strong self-interest in avoiding exposing themselves to further legal liability by providing additional evidence that supports the case against them. That would be sufficient reason to cut Trump’s incessant whining about voter fraud for which he he has never been able to provide any proof in the 60-plus court cases he lost.

What’s more, by posting Trump’s lies, Fox News could be placing themselves at risk of being banned by Twitter – just like Trump – for posting false and potentially harmful misinformation. It is Trump’s lies about the election that incited the deadly insurrection at the Capitol on January 6th.

Fox News has already shown that they are worried about being associated with Trump’s “Big Lie.” Last month Fox refused to air an ad by the MyPillow conspiracy crackpot, Mike Lindell. The ad was to promote his “cyber symposium” that he said would “prove” that Trump won the election. Needless to say, the “proof” exists only in his diseased mind. However, Fox News wasn’t going to take the chance of getting further into legal jeopardy, so they nixed the ad. And in retaliation, Lindell pulled all of his ads from Fox News. And since MyPillow is Tucker Carlson’s biggest advertiser, that leaves his show with hardly any major ads at all.

It will be interesting to see how this censorship melodrama plays out. Currently Trump’s cult disciples are in a tizzy online, lambasting Fox News as the “enemy of the people,” and pledging to boycott the network forever. Harrington is appearing on whatever mousy Fox News wannabe that will book her to bad mouth Fox for caving in to the “Deep State.” And Trump is still stuck with with his thumb in his mouth, unable to get his malicious messaging out. Could this be any more fun? Stay tuned and have plenty of popcorn ready.