Donald Trump’s former press secretary, Stephanie Grisham, is currently promoting her new book, “I’ll Take Your Questions Now: What I Saw at the Trump White House,” which comes out October 5, 2021. She was interviewed Monday on ABC’s Good Morning America by George Stephanopoulos, where she revealed some of her experiences as one of Trump’s longest serving aides. 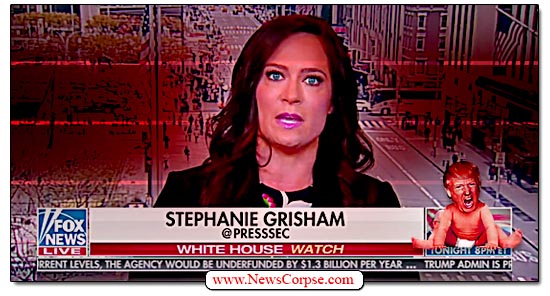 Excerpts from Grisham’s book have already disclosed, such as Trump’s unsavory fealty to Russian dictator Vladimir Putin. Other reports included descriptions of his bizarre behavior toward his staff, particularly women. But the GMA interview broke new and troubling ground. In it Grisham told Stephanopoulos that “I am terrified of him running for president in 2024.” She’s not the only one. The interview also featured this disturbing exchange:

Stephanopoulos: You were enabling the culture [of casual dishonesty] weren’t you?
Grisham: Yes, I was. And I reflected on that, and I regret that. Especially now watching him and so many people push the false election narrative. I now want to, in whatever way I can, educate the public about the behavior in the White House. Because it does look like he’s gonna try to run in 2024. […]

Grisham: He’s on his revenge tour for people who dared to vote for impeachment. And I want to just warn people that once he takes office, if he were to win, he doesn’t have to worry about reelection anymore. He will be about revenge. He will probably have some pretty draconian policies that go on.

EXCLUSIVE: Stephanie Grisham breaks her silence about what she saw inside the Trump White House.

When asked by @GStephanopoulos if it was a mistake to work for President Trump, Grisham says “yes." https://t.co/o3FCyKjxtw pic.twitter.com/KX2BwzR6BU

It’s a little late for Grisham to express her regrets when she spent five years enabling the lies and megalomania that led to Trump’s insurrection and attempted coup. She addressed her own failures in the interview and conceded that she was no hero and that she wasn’t looking for praise. She just wants to get the truth out now before Trump has a second chance to complete his authoritarian takeover.

Progressives don’t have to embrace Grisham to appreciate her belated confessional. As someone who has been a long-time, trusted insider in the Trump cult, she has a unique perspective that could reveal further unethical, and potentially illegal, activities. She should be among the first former Trumpsters deposed by prosecutors investigating his administration’s many crimes.

As for Trump, he appears to be spooked by Grisham’s disclosures. He has already lashed out at her with his predictable, infantile insults, saying that it was “obvious from the beginning” that she “didn’t have what it takes.” Which affirms his tendency to staff his White House with “all the best people” that he later deems to have been incompetent all along.

What’s more, Trump complained that her book was put out by a “radical left-leaning publisher.” That would be HarperCollins, which is owned by Rupert Murdoch’s News Corp., the parent company of Fox News. They have also published books by such radical left wingers as Jared Kushner, Sean Hannity, Tucker Carlson, Ben Shapiro, Newt Gingrich, Sarah Palin, and Ted Cruz.

Trump’s customary reaction to criticism is to throw childish tantrums. He literally told Mike Pence that “I don’t want to be your friend anymore if you don’t” usurp power that you don’t have to overturn the election results in Congress. And Trump is going full scorched earth over the revelations in Grisham’s book. Which can only mean that it’s likely all true and that he’s scared witless. As he should be.

UPDATE: Grisham tells CNN that Fox News, OAN, etc., were like state-run TV for Trump and could “potentially cause a lot of damage.”

Stephanie Grisham on how the White House used Fox News: "That's just where we went to get what we wanted out … By and large, they didn't get tough with us. They just took what we were saying and disseminated it." pic.twitter.com/qltmEzYvUk