There is often a fine line between between comedy and tragedy. It’s a line that the record of Donald Trump’s public life frequently crosses. For instance, while there is certainly nothing funny about Trump’s negligent and incompetent mismanagement of the COVID pandemic that has resulted in nearly 800,000 American deaths, you can’t help but laugh at his preposterous proposals to treat the virus with bleach injections. 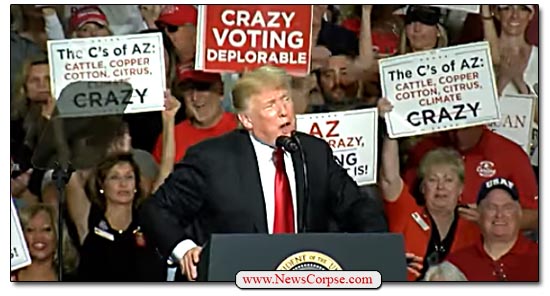 Trump’s Olympic-grade idiocy has, unfortunately, become a daily affair, even after his eviction from the White House. And it is buttressed by the cult disciples who cling to him like a maniacal messiah. An example of this humiliating behavior that Trump inspires from his flock was delivered Monday morning in a Twitter post by Newsmax White House correspondent, Emerald Robinson. Her tweet asked…

“Does Mitch McConnell still think Trump is ‘morally responsible’ for the Jan. 6th fake-insurrection created by the FBI?”

Does Mitch McConnell still think Trump is “morally responsible” for the Jan. 6th fake-insurrection created by the FBI?

Obviously Robinson hasn’t been paying attention to how obediently McConnell has been upholding Trump’s “Big Lie.” He was opposed to the congressional investigation into the January 6th insurrection. He urged voting against the release of any documents related to Trump’s criminal conspiracies. He is also against compelling testimony from Trump’s accomplices like Steve Bannon and Mark Meadows. So whether or not he “still thinks Trump is ‘morally responsible'” – which he said on the Senate floor shortly after the Capitol riots – that isn’t really relevant. McConnell clearly thinks Trump should be granted a “Get of Jail Free” card. Although his motivation is more focused on the GOP retaining power then on Trump’s interests.

However, that wasn’t the only ridiculousness in Robinson’s tweet. It is also notable for calling the insurrection, that everyone watched live on TV, “fake” and baselessly accusing it of having been “created by the FBI.” That’s a conspiracy theory she probably borrowed from Tucker Carlson, the Senior Conspiracy Crackpot of Fox News.

In addition to that laughably moronic outburst, a supporter of Trump at a recent cult rally was interviewed by TheGoodLiars about getting vaccinated for the coronavirus. It didn’t take long to devolve into pure farce:

Trump Supporter: Everyone who has taken the vaccine will be dead within 5 to 15 years. Guaranteed!
TheGoodLiars: So why did Donald Trump authorize Operation Warp Speed and create the vaccine?
Trump Supporter: Because if not, I think a lot more people would have died.

Talked to a guy who believes the vaccine is killing people and Donald Trump saved lives with Operation Warp Speed. pic.twitter.com/R1mRDB2J45

Lemme get this straight. More people would have died if it weren’t for the vaccine that is killing everyone? For the record, there have already been about 220 million American adults vaccinated. The total population of the U.S. is about 330 million. That means that after all of these vaccinated people die off there only be 110 million people in the whole country. That will have some positive consequences for the environment and anyone who is looking to buy property. Problems with traffic and getting concert tickets will disappear. However, the economy will take a massive hit with the reduction in both people to consume things and people to make things.

This Trumpist also seems a bit confused about the lethality of the vaccine. When asked about Trump’s role in producing it, he flipped his argument, asserting that it actually saved lives. So which is it – miracle cure or deadly toxin? Don’t bother asking any Trump supporter.

As a bonus feature, you may be interested to learn that Donald Trump Jr had his fee fees hurt when he learned that the people of New York hate him and his family. He tweeted a link to an article in the New York Post that claimed that “[Mayor] De Blasio’s bid to rid NYC of Trump name could cost taxpayers over $30 million.”

That $30 million figure is based on dubious estimates by either the Trump Organization (known for misrepresenting the value of their properties) and the NYPost. However, many Trump properties have already divorced themselves from the brand on their own. And there is an argument to be made that ditching the Trump name would make the properties more profitable. So this is a trend that is only just getting started.

One thought on “OMFG! A Trump Supporter and a Reporter Put Their Hysterical Stupidity on Full Display”