In its continuing pro-COVID mission, Fox News has unleashed another in their efforts to infect as many of their own viewers as possible. The disinformation spread by Trump and Fox News is affirmed in recent studies that prove that “Counties that went heavily for Donald Trump have seen much lower vaccination rates and much higher death rates from COVID.” 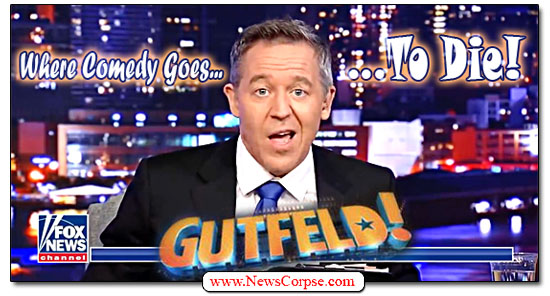 These horrific statistics would justify referring to the surging coronavirus crisis as the “Pandemic of the Fox News.” And yet, the network is still advancing flagrant falsehoods that will assuredly lead to more suffering and fatalities. The latest example of that sociopathic disregard for life came during Friday’s episode of Fox’s The Five. Co-host Greg Gutfeld was compelled to relieve himself of some of the most ignorant commentary ever unleashed on the program. Which is really saying something.

In a monologue (video below) about the new Omicron variant that is rapidly spreading throughout the nation and the world, Gutfeld advised the already deluded Fox audience to forego getting vaccinated or getting the booster if they had already been vaccinated. He gushed…

“If you urge a booster for Omicron, does that mean you are actually going to end up preventing a more effective kind of vaccination – nature’s vaccination – which would raise the natural immunity in a safe way? But with a booster, that may not be that effective. Why would you get a booster against what is, effectively, could be a booster. Call me a quack, I don’t care.”

Fake Dr. Gutfeld is, as usual, talking out of his assumptions drawn from his utter stupidity. The notion of getting infected and recovering from COVID as “nature’s vaccination” is a potentially deadly option that has been debunked repeatedly. While an infection does produce antibodies, their strength and longevity do not compare with that of the actual vaccine. What’s more, you have to risk your life and the lives of others in order to go that route. But Gutfeld isn’t a quack. He’s a murderer. And he wasn’t through…

“Here’s the poop, literally. In Florida they looked at the samples of wastewater in Florida sewage and they found that 100% of the samples had Omicron in it. But not in the hospitals because people weren’t going to the hospitals with Omicron. Which means that everybody has it, but it’s so mild that people are handling it on their own.

Gutfeld’s analysis couldn’t be more ridiculous and dangerous. The data to which he is referring describes the results of wastewater testing where the Omicron variant was found in samples of the coronavirus. That doesn’t mean that “everybody has it.” It only means that where the virus was found it was of the Omicron variety. It wasn’t found in everybody.

Furthermore, the data doesn’t suggest that being infected with the Omicron variant would necessarily result in a mild illness. Gutfeld doesn’t bother to consider that the samples found might be from people who had been fully vaccinated, and that’s the reason the illness was mild. But Gutfeld’s advice is to reject vaccination, which would likely result in much more severe illness and possibly death. He also doesn’t consider the potentially tragic consequences for people who could be infected with the Delta variant that is still infecting and killing thousands. His toxic advice will only make that worse. He then went on to malign President Biden saying that…

“That’s what makes Joe Biden kind of a despicable non-leader. He hears of Omicron, high-transmission, low severity, and instead of trying to help America regain its sense of normalcy, he redefines it as a ‘winter of death.'”

So what Gutfeld considers a “despicable non-leader” is someone who cares about people and aspires to keep them from unnecessary harm and to save their lives. While Omicron is highly transmissible, it has not been found to be low severity. The data available at this early stage isn’t sufficient to draw that conclusion. Many of those infected by Omicron were vaccinated, which would lessen the severity. But one thing that has been determined is that those who have received the booster have a high degree of protection from serious illness, hospitalization, or death.

Gutfeld is putting lives at risk with his thoroughly unqualified medical advice. He even went further to disparage other methods of mitigating the harm from the virus, saying that “We know that masks aren’t necessary.” That’s the sort of idiocy that is all too rampant on Fox News. And it is unconscionable that the network – where everyone is required to be vaccinated, or tested daily – would disseminate such dangerous lies to their viewers. But then, it’s Fox News. And they subscribe to the pledge made by Gutfeld above: “Call me a quack, I don’t care.” They obviously don’t care.

Fox host: "If you urge a booster for Omicron, does that mean you are going to end up preventing a more effective vaccination, nature's vaccination" pic.twitter.com/B3Rq0CjfL3