Y’all better get ready, people. The End Times are upon us. And that divine prognosticator, Glenn Beck, sees it all clearly. And, praise Gawd, Fox News is there to welcome the Rev. Beck and disseminate his “wisdom” to the masses who gather nightly to soak in the sermons of Friar Tucker Carlson. 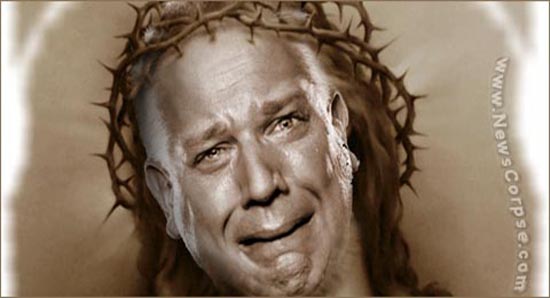 On Tuesday night’s episode of Carlson’s Fright Wing Glower Hour, Carlson handed his pulpit over to Beck to propound on the impending apocalypse. It’s a subject that Beck knows well and has been predicting for years. But this time he really means it. So take heed and prepare yourself for the long awaited and total decline of Western civilization that Beck imparted unto Carlson, saying that…

“This is not an American problem. This is the entire West going away by 2030. And I think – you know the World Economic Forum just war gamed the next economic collapse. I think that’s coming in the next couple of years. I could be wrong. I usually am on timing. But when that happens, it is lights out. It is over. They will control your food, your water, your work, your education, your banking, your money, gasoline. […] They are going to bankrupt the entire West. And only the elites are going to be able to have money, the food they want, the jobs they want, etc., etc. We will be left in the dust. We must educate ourselves right now.”

Let that sink in. The Western economy is going to collapse in a couple of years and “the entire West [is] going away by 2030.” If that doesn’t scare the bejeezus out of you, just take a look at Carlson’s glazed over gaze. He has an encrusted expression of utter dread throughout Beck’s ominous oratory. If it didn’t blink a few times you’d think it was a cardboard cutout. Carlson is clearly frozen with fear.

And why shouldn’t he be? With President Biden in the White House orchestrating a socialist takeover of America by mandating life-saving vaccines to combat a deadly pandemic, and democracy zealots trying to make it easier for people of color, undocumented immigrants, and (gasp) Democrats, to cancel out the votes of white, Trumpian Republicans, and climate change (oops, that one’s real, and they aren’t worried about it). Given the prospects of this nightmarish future, the end can’t come too soon.

If you doubt Beck’s premonitions, be aware that he has predicted similar catastrophes before, so he must know what he’s talking about. Prior to the 2020 election, Beck prophesized that “If the Republicans don’t win in this next election, I think we are officially at the end of the country as we know it.” But that’s just the most recent warning.

Never mind that Beck also once said that that “So much of what I used to believe was either always a sham or has been made into a sham.” He has since recanted that confession and is now confidant that his shams were the real thing. And Carlson is a true believer, despite the fact that his own Fox News lawyers once defended him in a defamation lawsuit by successfully arguing that no reasonable person would take him seriously.

So perhaps it is finally time to pack it in and set sail for whatever dystopia these Judgment Day deplorables are prepping for. If the Rapture is imminent, you wouldn’t want to get left behind, would you?

UPDATE: Beck has COVID (again) and it’s “getting into my lungs.” So he’s taking Ivermectin and wheezing through an interview with Fox’s Mark Levin.